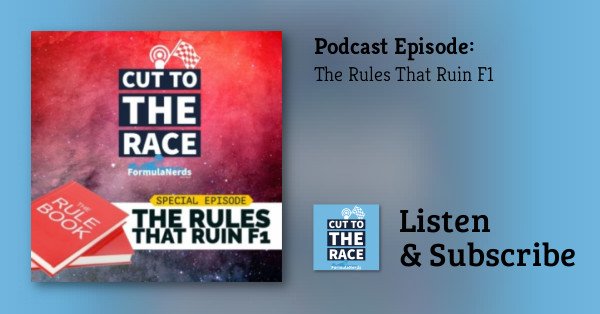 PODCAST: The Rules That Ruin F1

On this week’s Podcast Oli, Callum, Sam, and Grace discuss the rules they believe ruin Formula 1.

Firstly the gang start off with Callum’s choice of changing tyres under a red flag. Yes, a very controversial one! The group go into depth about how F1 could change this rule to make it fairer for the other drivers who changed before the red flag. They also discuss whether it should just be scrapped entirely.

Sticking with the red flag theme, Sam brings up one of his pet hates. That being, repairing the car under red flag conditions. Could it be deemed bad racing? As we know Michael Masi likes F1 to be a “motor race” so does changing parts under a red flag ruin the essence of a “motor race”?

The group also talk about lapped cars being able to unlap themselves under a safety car. YES. We love discussing the controversial ones here on the ‘Cut to the Race Podcast’.
Oli comes up with a few controversial rules, Grace brings up her favourite meme from the season (#BottasPlaysBowling) and obviously, they all disagree about nearly everything.
The group discuss many more rules, but we don’t want to spoil it for you- that wouldn’t be fun.

It’s not one to be missed, especially if you have a bone to pick with the rules of F1.