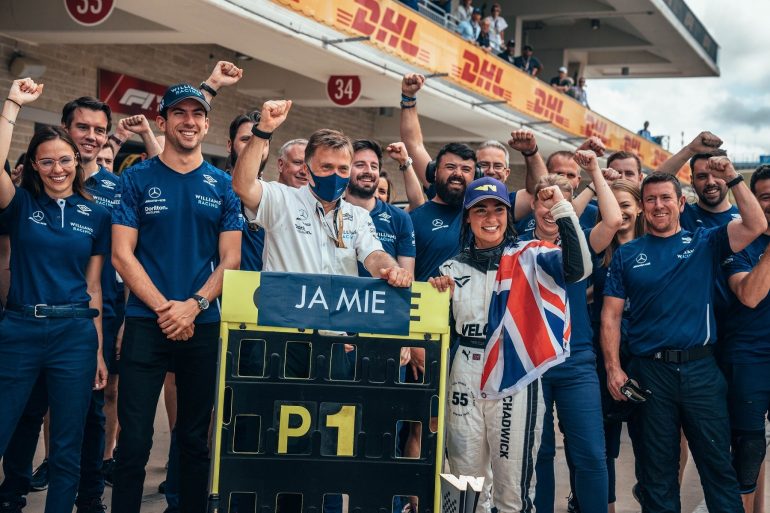 In a recent interview, Williams CEO and Team Principal Jost Capito has had his say on Jamie Chadwick’s decision to race again in the W Series this year.

Chadwick has won both iterations of the all-female racing series and was hoping to move up the motorsport ranks this year.

But, after failing to obtain a drive in Formula 2 or 3, the Williams development driver has signed up with Caitlin Jenner’s new team, Jenner Racing, to return for a third season in 2022.

And Capito had this to say about that decision:

“It’s up to her how she develops her career. We support her path. I think she had a few options and if she wants to continue racing in the W Series, that’s her choice.

“If you still have Formula 1 as your goal, then you have to go through Formula 3 and Formula 2 at some point.”

This has caused controversy as Chadwick has said that her main issue in securing a seat in those series was funding – funding which should really be coming from Williams considering she is part of their driver academy.

The comments were also poorly timed, coming on the eve of International Women’s Day.

The aim of the W Series was both to bring attention to female drivers and to provide them with a stepping stone into the regular, male-dominated junior series.

And Chadwick could not have done much more to prove her ability behind the wheel.

She was crowned the champion of the inaugural W Series season – winning two races and finishing on the podium in five of the six that year – before defending her title in 2021 with six race wins and 12 podiums from the 14 races, beating fellow Briton Alice Powell to the title by 27 points, whilst also featuring in Extreme E.

The extra 15 points added to her Super Licence tally by that triumph means that she now has enough to participate in Formula 1 Free Practice sessions.

And yet, she has been unable even to pick up a drive in F3.

By Katy Roberts7 days ago

“I think the most important factor is the funding and to be quite honest, we were not able to raise the necessary funds in the short time that we had”, said Chadwick in a pre-season update.

Williams have given a driver with significantly better financial backing a chance during Free Practice sessions in Roy Nissany, despite a number of underwhelming years in F2.

Perhaps it is time that they put their money where their mouth is and provide Chadwick with the required backing to truly develop a career that should be flourishing but is currently stalled at the back of the grid.