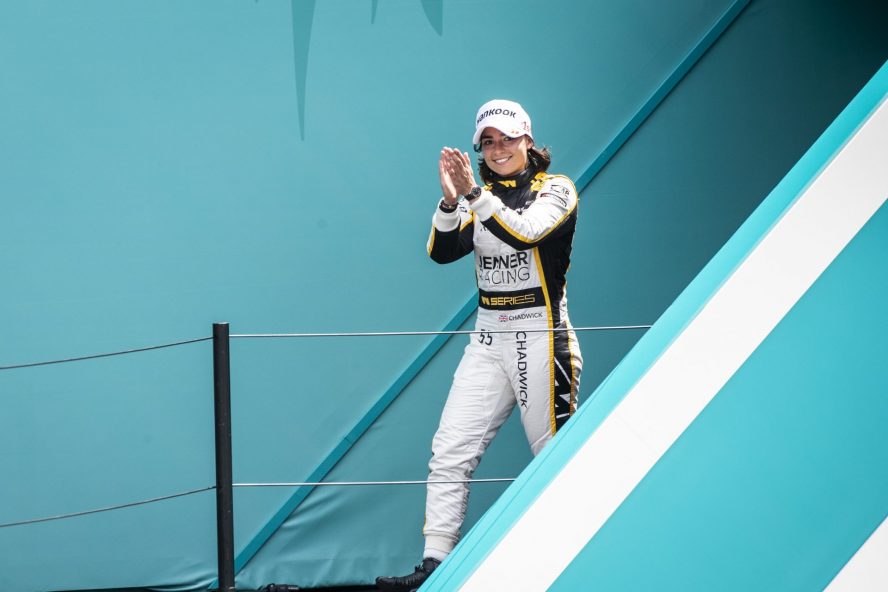 Jamie Chadwick conquered yet another pole position for the W Series race in Barcelona. Starting from the front row in tomorrow’s race beside her will be 2021 runner-up Alice Powell.

Track limits and decreasing temperature were crucial factors in the battle for pole position with numerous drivers looking competitive, Sarah Moore indeed being one of those. The Brit went up to the top of the timing sheets followed by fellow Brit Jessica Hawkins establishing the best time in front of teammate Alice Powell.

The session immediately saw Jamie Chadwick on top with a 1:47.309 but quickly followed by a provision pole in 1:46.890 by Abbie Pulling, one of the favourites for the Championship according to W Series CEO Catherine Bond Muir. Proving the first impression accurate, the young Brit continued with an impressive performance throughout qualifying and will start the race from the second row in third.

On the home ground, a good performance was also achieved by both Belen and Marta Garcia, who will position themselves in fifth and sixth on the grid. Further behind Nerea Marti will start from 11th, having to fight her way through the race to deliver a good performance in front of the home crowd.

A very contested session saw most drivers continuing to improve with only 5 minutes to go. Despite a not particularly brilliant start to qualifying, Jamie Chadwick obviously came into play to regain the lead of the timing board in an endless battle with rival Alice Powell. The 2-times W Series Champion finally confirmed her pole position, granting herself the possibility of another successful weekend if concretized tomorrow.

Crucial for the race, which will start at 13:40 GMT, will be tyre wear on the Hankook compounds and controlling the pace throughout the 30 minutes due to the lack of pitstops. Moreover, as shown by the Miami weekend, unpredictability can always come into play for another weekend that seems set to confirm the great competitiveness of the W Series in 2022.

After a mega quali, here's your top three for the starting grid tomorrow. 👊

The provision starting grid for the race is as follows:

*Tereza Babickova will start from 16th following a 3-places grid penalty as a consequence of a incident with Juju Noda in Miami race 2.