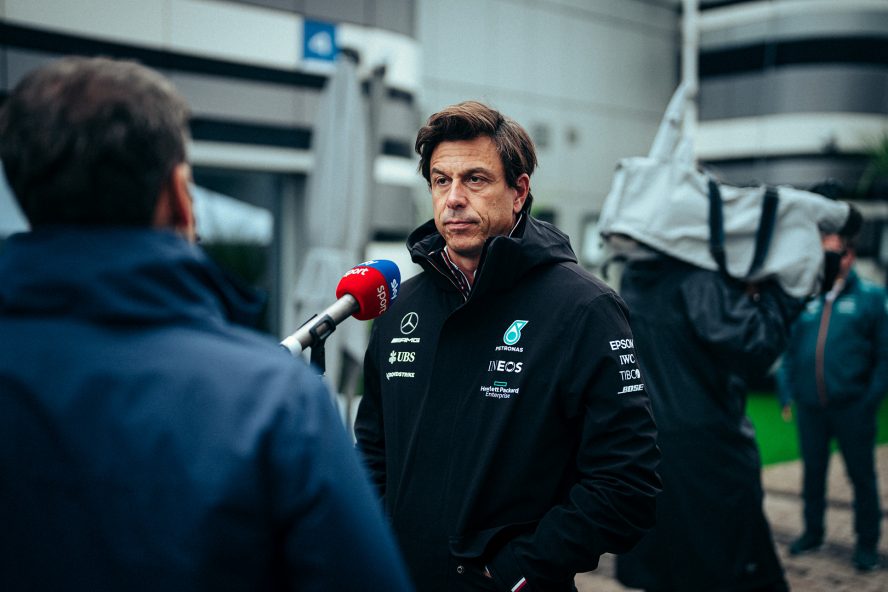 Wolff: “This situation has clearly gone too far”

Mercedes is currently the most vocal team to ask for and sustain an FIA intervention to regulate porpoising. While other teams spoke up against the introduction of new measures, Toto Wolff declared other team principals’ behaviour as “pitiful”.

After the complaints from numerous drivers, including the most vocal being Mercedes driver Lewis Hamilton, the Federation announced it will monitor porpoising in Canada and eventually take action for the following races. Effectively, the FIA will measure vertical oscillations and eventually introduce a limit to the allowed level of porpoising.

FIA’s intervention on porpoising is expected to grant an advantage to Red Bull and disadvantage Ferrari and Mercedes. Yet, it was the Milton Keynes team principal who spoke out against the directive. Horner told Sky Sports F1: “It would be unfair to have effectively what we’d deem to be a regulation change halfway through a year because a team has missed a target. The emphasis should be on that team to sort the issue.

If the car is dangerous, that’s down to the FIA. They still have a black flag in their armoury. If they deemed the car was dangerous or unacceptable for drivers’ safety, they would and should black flag it.”

Wolff: “Coming up with little manipulations in the background is just pitiful.”

According to Motorsport.com, Mercedes team principal Toto Wolff would have expressed his frustration with the opposition of other teams on Saturday morning in a team principals’ meeting. Wolff then went on to also speak out publicly about the rivals’ attitude: “This is a sport where you’re trying to keep a competitive advantage or gain it. But this situation has clearly gone too far. All drivers, at least one in every team, have said that they were in pain after Baku, that they had difficulty in keeping the car on track or blurred vision:

By Grace Robinson1 week ago

“Team principals trying to manipulate what is being said in order to keep the competitive advantage and trying to play political games when the FIA tries to come up with a quick solution, to at least put the cars in a better position, is disingenuous. And that’s what I said.

I’m not only talking about the Mercedes: all of the cars suffered in some way or other in Baku, and still do it here. The cars are too stiff. The cars bounce or whatever you want to call it. We have long-term effects that we can’t even judge.

But at any time this is a safety risk, and then coming up with little manipulations in the background, or Chinese whispers, or briefing the drivers, is just pitiful.”