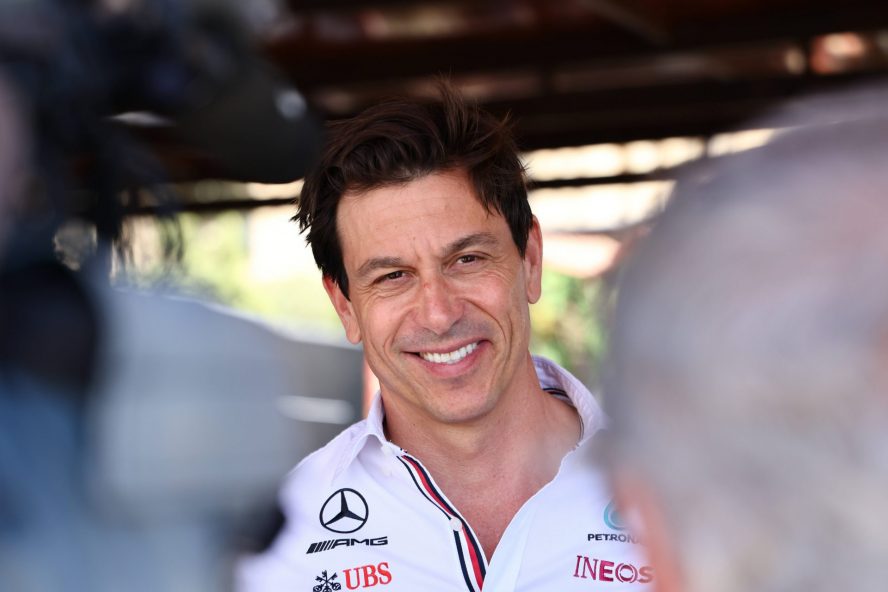 Both Mercedes drivers crashed in qualifying for Austria. Team Principal Toto Wolff has confirmed the repairs to the W13 are costly in more ways than one.

Mercedes enjoyed a change in fortune at the previous race at Silverstone. The combination of a smooth track surface and new upgrades saw the Silver Arrows on the pace of the frontrunners.

Fast forward one week to Austria and the team hoped to continue with their momentum. Instead, Lewis Hamilton and George Russell crashed out in separate incidents in qualifying.

Such was the damage, Mercedes were working into Practice 3 on Saturday to rebuild both W13s. The scale of the repairs has meant an unexpected and unwelcome secondary effect. F1 recently announced a 3% increase in the cost cap to cover the worldwide rise in inflation. Mercedes Team Principal Toto Wolff speaking on Saturday confirmed that Mercedes have spent a third of the additional funds awarded by the rise on the overnight repairs to the W13. Wolff confirmed that Mercedes is still operating above the cost cap:

“We are still, the three of us [Mercedes, Red Bull and Ferrari], very much above it. That means saving costs will be necessary – at least for Mercedes.

“So the outcome is helpful. Does it solve our problems? No.”

“We spent a third of the additional gain we got yesterday in one, right after it!”

Commenting on the detail of the damage to both cars, Wolff  the garage looked like “somebody dropped a Lego car on the floor”. Praising his mechanics, Wolff admitted the mechanics needed to “work round the clock” to repair both cars:

“A lot of damage. I think we have two floors, two [gear]boxes that we need to check, rear wing – lots of bits and pieces yesterday in the garage and in the early evening it really looked like somebody dropped a Lego car on the floor. And yes, the mechanics are doing great work.

“On the damage, yes, the car is pretty injured, both cars are pretty injured – floors, we have precautionary checks, changes for the gearboxes, a rear wing for George, plenty of parts – that has cost-cap implications, but the biggest is the mechanics have to work work around the clock. So, we hope to have a good car for the Sprint race to put us in a good position for tomorrow.”

RUSSELL CRASHES! It's a nightmare Quali for Mercedes! 😮 pic.twitter.com/ZtdgA9peNn

Extensive damage to both cars

Despite both cars crashing out in qualifying, Wolff did not blame Hamilton or Russell. Revealing detail on the W13’s handling, Wolff said the car is “trickier to drive and it’s faster now. Wolff added  he was happier with a faster but erratic car:

“I think the car is still tricky to drive and now we can actually fight for front positions, I’m really happy to see that they [can] attack. And both have been carrying [extra speed]; Lewis the corner before was carrying 10[km/h] more speed and made Turn 6 and then he’s carrying 10[km/h] more speed into 7 and didn’t make the corner! And the same a little bit for George; you see he was up on his delta time and that was a particular strength of his run and it went too far.

“Whether it was wind, or any other conditions, I think the summary is that the car is trickier to drive and it’s faster now – so for me that’s absolutely okay. The car is still tricky, and Austria – these corners are on a knife’s edge to carry a lot of speed – so as I said before I’d rather have a quick car and end up in the wall and more learning.”

Mercedes salvaged a strong result in the Sprint Race. George Russell will line up in P4 on the grid for the race, with Hamilton starting P8.