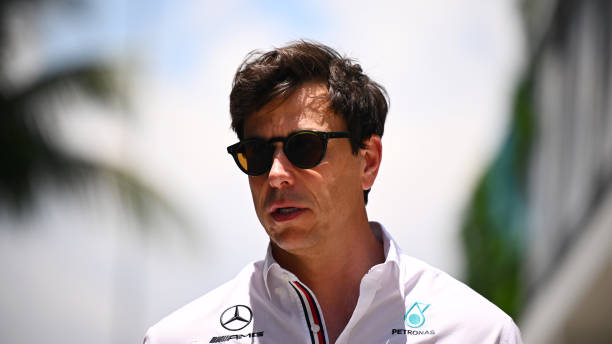 MIAMI, FLORIDA - MAY 05: Mercedes GP Executive Director Toto Wolff looks on in the Paddock during previews ahead of the F1 Grand Prix of Miami at the Miami International Autodrome on May 05, 2022 in Miami, Florida. (Photo by Clive Mason - Formula 1/Formula 1 via Getty Images)

Wolff on the Struggling W13: “We just don’t understand how to unlock the potential”

Five races into the season, the Mercedes team has yet to see improvements to the car.

Mercedes team boss Toto Wolff believes the W13 has the potential to be one of the fastest cars on the grid. However, despite George Russell being the only driver to finish in the top five every race this season, the Silver Arrows have clearly been struggling.

Car performance wasn’t Mercedes’ only problem at the Miami Grand Prix, with Lewis Hamilton criticising the team’s strategy call that put him behind Russell yet again.

After missing out on Q3, Russell was pleased with fifth place at the inaugural Miami Grand Prix. His teammate, however, was left frustrated by a strategy call that left him to finish behind his teammate for the fourth consecutive race.

Hamilton qualified in sixth on Saturday but ultimately didn’t have the pace to improve much from there. When McLaren’s Lando Norris brought out a late Safety Car, Russell, who hadn’t pitted yet, was able to save time in the pits. The team asked Hamilton to make the choice of whether or not to pit himself. He chose not to, and then was forced to defend from his teammate on older tyres for the closing laps of the race.

Hamilton made comments to Sky Sports after the race about being asked to make the call himself. “In that scenario I have no clue where everyone is,” he said. “So when the team says it’s your choice, I don’t have the information to make the decision.”

That’s what I rely on the guys for, but today they gave it to me and I didn’t understand it.”

Both Mercedes drivers were disappointed with the lack of pace the W13 had, especially when the new upgrades looked promising after FP2.

Russell had mixed emotions, glad to finish fifth but thinking the car should have had the pace for more. Hamilton, on the other hand, was much more open about the struggling W13.

“Unfortunately we are at the same speed as we were in the first race,” he said. “We haven’t improved in these five races but I am hopeful, we have to keep trying and keep working hard.”

Despite being five races into the season without any noticeable improvements, Wolff maintains that the basic design of the car isn’t flawed.

“There is potential in the car and she is fast,” he insisted. “But we just don’t understand how to unlock the potential.”

Russell’s results this season have proved that the W13 isn’t totally useless. But the porpoising has proved to be a big problem for the drivers, with Russell mentioning severe pain due to the bouncing after the Imola GP.

Mercedes brought front and rear wing upgrades to Miami, but this didn’t help the problem. Anyone could see the violent way the car was porpoising through the corners. After the race, Russell told Sky Sports he couldn’t have gone any faster due to the issue.

“I felt like if I pushed any further I was going to crash because I was just bouncing through the corners,” he said. “Because of the slower speeds, the aero wasn’t working as hard so I could manage it but we don’t get it at the moment to be honest, I certainly don’t.”

For now, Wolff and the team are confident that they can make the necessary improvements to the current car. But, they know that if they can’t sort their problems out soon, they’ll have to reevaluate the entire design.

Wolff has cited the timeline for making major changes to the car. He said “I would be asking for an answer after Barcelona and then we have to look ourselves in the mirror and ask: ‘Did we get it wrong or not?”