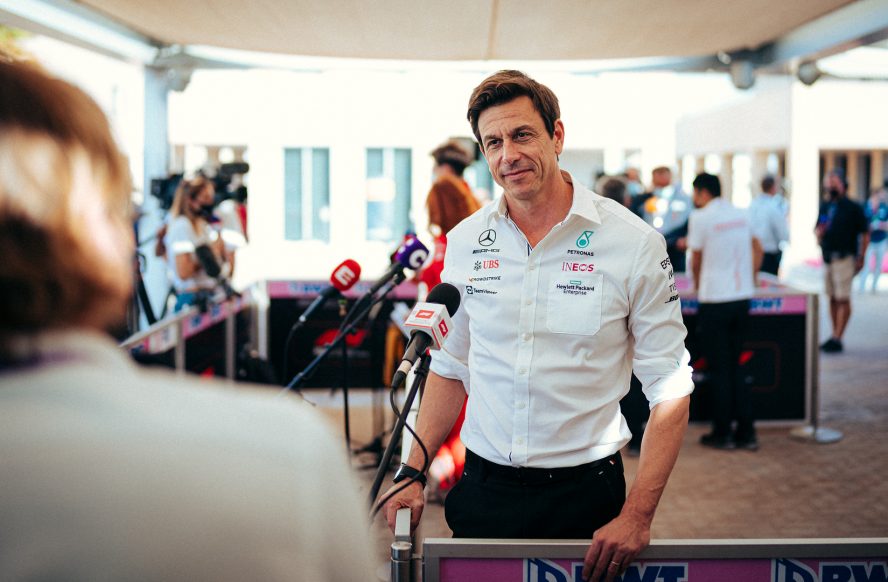 Wolff On Budget Cap: “I Want My People To Be Well Paid”

Mercedes AMG F1 Team Principal Toto Wolff continues its battle for an increase in the budget cap. Brackley’s opinion is that the current rate of inflation requires teams to compensate their employees’ salaries and hence need bigger expenses.

The budget cap had been previously been fixed at 145 million dollars and is now around $141.2 million following the reduction of the calendar with the removal of the Russian Grand Prix. However, the impact of the war against Ukraine also means teams suffer inflation rates, meaning higher general costs.

Currently, Mercedes, Red Bull, and Ferrari are reportedly asking for a raise in the budget cap but are being opposed by smaller teams such as Alpine, Alfa Romeo, Haas, and Williams. According to these, inflation would only be an excuse for bigger teams to avoid the budget cap’s limit. The simple solution, as reported by Motorsport.com, sustained by Alfa Romeo Team Principal Fred Vasseur is to reduce development: “But if we have some increase on energy or freight, the solution is to switch off the wind tunnel and stop bringing updates every single weekend.”

Answering the critics, Toto Wolff promptly clarified to Motorsport.com that the request on the budget cap comes from the intention to rightfully adjust wages to the historical moment: “It’s not that we want to generate more profit, it’s literally allowing people to have their salaries compensated for the extraordinary inflation they are suffering from. So, it’s not that we suddenly want to have more, but let’s stick to the fact when we entered the year and the premises that we ended the year and then let’s look at the numbers now. And then hopefully we can find a way to adjust.”

Not hiding the frustration with the opposition, the Mercedes Team Principal went on to add: “I think the worst for the sport is having a stubborn position that some of the smaller teams think that the big ones are trying to gain an advantage and we’re actually going to screw them by not allowing them to do this and us on the other side seeking to lift the ceiling, which we don’t want to do.

And I can tell you from my position as a team owner, I don’t want to lift the ceiling just to have a cost cap ever increasing and basically outmanoeuvring the initial concept. But I want my people to be well paid especially in such tough circumstances.”

An allowance for transportation costs?

While a compromise doesn’t look close, an opening might be a bigger allowance to cover the cost of transportation. As a matter of fact, according to Wolff: “I think what we can demonstrate is very easy. Our energy costs in Brackley have gone up from £2.5m to £6.5m. Our freight costs in a similar way, I think it’s two to six. Black and white, you can follow that on the accounts, look at it in the P&L.”

Regarding this specific case, Haas Team Principal Gunther Steiner admitted to Motorsport.com he could sustain measures with the help of the Formula One Management: “We just take the transport cost, I would say it costs three million more this year than last year, up the cost cap maybe three million on the transport costs, because that’s also easy to police because everything is done by FOM [Formula One Management].

So, you cannot say ‘Oh, I spent more’ because FOM sends you the bill. Everything is very transparent. And then say next year, if the transport cost comes down again, it’s a kilo price. It’s very easy to monitor and to control. Okay, it’s down again, we take that three million away.”

Finally, Wolff’s request for an increase in the budget cap seems reasonable but so do the smaller teams’ motivations. The hope is that a measure in the middle can solve the matter as sustained by Haas or Aston Martin.