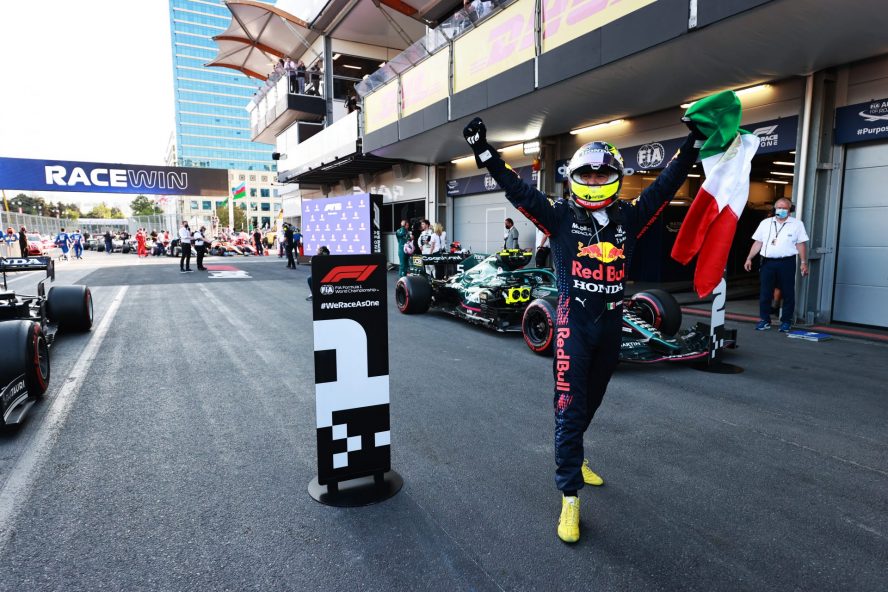 Who’s ready to bring the fight to the streets of Baku?

After an eventful Monaco Grand Prix weekend, some drivers can’t wait to make their mark in Baku.

A year on from his maiden Red Bull win, Sergio Perez will be looking to continue his winning streak. Not only is Perez the reigning Baku champion but he has also just pulled off an incredible victory around the streets of Monaco.

The Monaco victory has given Perez the points to genuinely pose a threat to the title fight. This weekend will be a ‘make or break’ one when it comes to Perez and Red Bull. It will be interesting to see if Red Bull allows Perez and Verstappen to fight each other this weekend.

As history tells us, Red Bulls fighting in Baku can be a risky game…

At the Spanish Grand Prix, Max Verstappen suffered severe issues with his rear wing in qualifying and in the race. The team appeared to have solved the problem for Monaco, however, Monaghan has stated that Baku will be different.

When the DRS was enabled in Monaco, the wing would open whilst the airspeed against it was around 160km/hour. In Baku, Monaghan has predicted it will be almost double that speed. This is why Baku will determine if Red Bull has fixed the issue once and for all as the speeds will be much higher.

After an unfortunate Monaco Grand Prix, Alex Albon has set his sights on Baku. The Thai driver has said that the race in Monaco was a “tricky day” and that the weather and red flags hindered his performance and rythm.

He did go on to say that the car did “feel competitive at points”. This should be promising for the Williams driver who will want to pull of another points finish sooner rather than later.

I think it’s probably a weekend to forget for us, but that’s how it goes sometimes. We’ll focus on the next one.”

Albon has set his sights on this upcoming weekend, maybe this will be one for some points.

George Russell has stated that his Mercedes should be more suited to the streets of Baku than it was to Monaco. Russell believes that the porpoising should be less, and therefore there should be a quicker pace.

However, the British driver doesn’t think it will be a “transformative” weekend. Russell still believes he will be “three tenths” off the leaders and that the unpredictable road surface could be an issue.

Russell hopes to make it round the circuit, through the weekend and hopefully into the Top Five (once again).