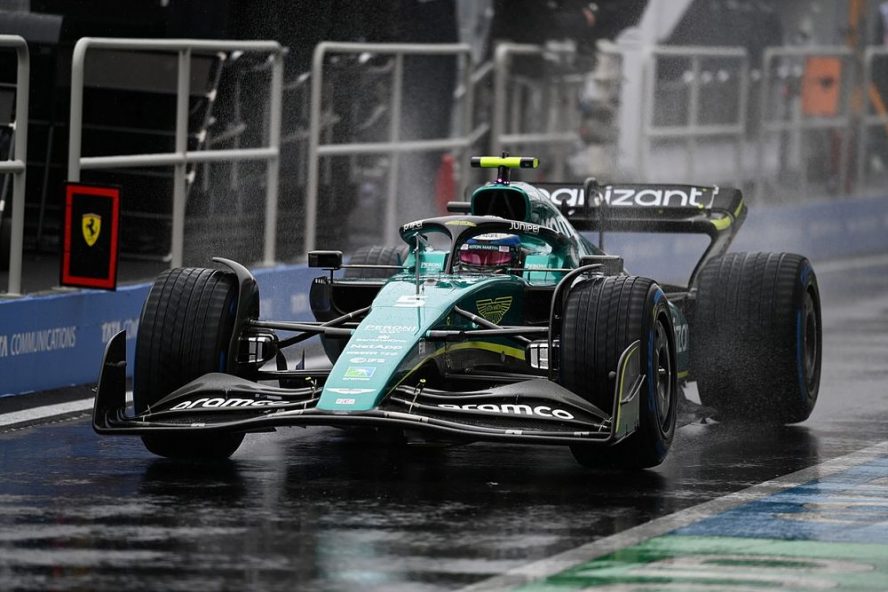 What happened to Aston Martin in Qualifying?

Both Aston Martin's suffered a Q1 shock elimination in Canada. Just a few hours before Vettel looked set for a strong qualifying performance. What went wrong?

Aston Martin headed into qualifying for the Canadian Grand Prix confident of a strong result for Sebastian Vettel. The four-time World Champion finished Practice 3 in a competitive P3. Vettel and team-mate Lance Stroll instead were knocked out in Q1.

The AMR22 was flying in the hands of Sebastian Vettel during Practice 3. His car hooked up perfectly for the changeable and challenging conditions,  Vettel traded P1 times with Alpine’s Fernando Alonso. Visibly confident, Vettel attacked the kerbs at the Circuit Gilles Villeneuve.  Team-mate Lance Stroll struggled in the wet conditions, finishing the session P13.

The team started qualifying a little over two hours later in similar conditions, albeit with the rain stopping. Instead, both cars struggled for grip and pace, ending up in P16 and P17 following Charles Leclerc’s penalty.  The AMR22 appeared a very different car, leaving the team confused as to where the performance from just a few hours earlier had gone. Vettel’s disappointment was clear from his team radio: “What was that? So different to this morning, so different, “I had no grip. Felt like the rear left was broken.”

The Race is reporting Team Principal Mike Krack believes that the AMR22’s need for multiple warm-up laps to build up tyre pressures may be behind the loss of performance. Relying on a wet track, the fast-forming drying line that appeared during Q1 caught out the team.  As the clock ran out, both Aston Martin’s were unable to improve, leading to a double shock Q1 elimination:

“We ran quite a lot this morning, and the pressures didn’t come up very well. So we had to take a lot of laps to build pressures. And we thought that the conditions were quite similar [for qualifying].

“But we had 20 cars on track in the afternoon, which were probably drying the track or making the track faster, much, much quicker than we were anticipating.

“Then we ran out of time. You’re there and you try to make the best out of it.

“And had we managed into Q2, we would have been able to adjust it in time or to make further adjustments. But we ran out of time.”

"So different to this morning. I had no grip. It felt like the rear left was broken. AH MAN!"

Sebastian Vettel was in disbelief at going from 3rd fastest in FP3 to eliminated in Q1 😠 pic.twitter.com/EwgsXhlwgc

Krack also commented on the polar opposite set-up needed for qualifying compared to Practice 3, acknowledging Aston Martin may have gone in “in the wrong direction”‘:

“But it went maybe a bit in the wrong direction.“Because as I said this morning, we were really struggling to get the temperatures up. And this afternoon, it was exactly the opposite.”

Reflecting after Qualifying Vettel admitted had “calmed down”, but rued the missed opportunity of a strong result:

“I’ve calmed down now,” said Vettel. “What’s the point of being pissed off now? “It’s one of those days where in a wet session with just a car like you want it to, you can make a difference.

“And I don’t know what went wrong. So we missed that opportunity.”

The four-time World Champion is confident of a strong pace in the race. However, he is cautious of the challenge of moving through the field from near the back of the grid.  Vettel is also keen to understand what happened in qualifying as he still does understand the cause of his loss of pace:

“It’s the same old game, we are probably faster than the cars right ahead of us, but we’re stuck with them for the beginning,” “And hopefully, we can have a good start, then we’ll see with strategy.

“You’re not going to be able to do something completely unexpected and come out first. But we need to be sharp.

“First of all, we need to try and understand what happened, whether there’s actual damage or whether we did something wrong in, I don’t know, preparing the tyres or the lap.

“And then turn the page and race hard. I still believe we can make some progress and maybe grab a point.”