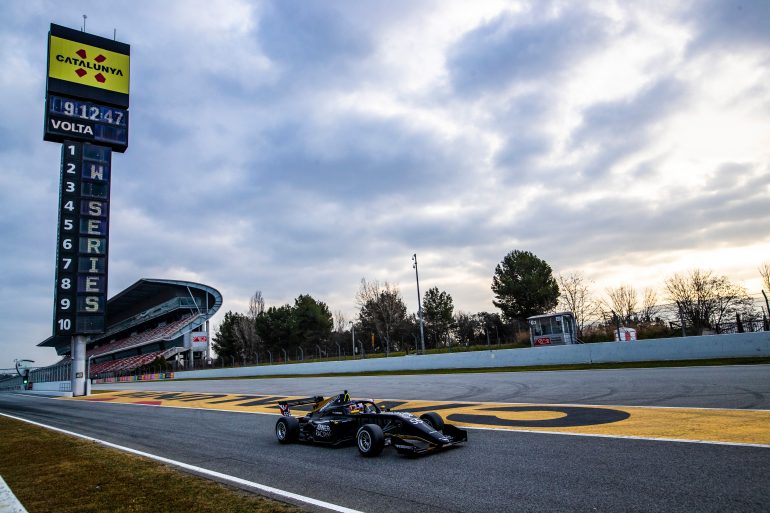 W Series will take the track again today for its pre-season test at the Circuit of Catalunya. Yesterday, multiple red flags repeatedly stopped the sessions with Jamie Chadwick topping the morning session.

Cars are in action in Barcelona! Day 1 of testing saw the first 10 drivers taking the track for two sessions that were unluckily often interrupted by red flags, the first one due to a fuel concern in the morning. Although live timing wasn’t available for the afternoon session, the morning session confirmed returning Champion Jamie Chadwick on top, closely followed by Aston Martin driver ambassador Jessica Hawkins and British upcoming talent Abbi Pulling.

Day 2 will see the remaining 10 drivers in action in Spain. Between these, in particular, to notice that during the week Powell has announced her return to W Series with new team Click2Drive Bristol Street Motors Racing while Kimilainen will race for Puma in 2022. Both drivers already expressed their intentions to challenge Chadwick for the title after last year’s close call with the now 2-times Champion only able to secure the title during the last weekend in Austin.

On the other side, W Series will continue racing as a support Championship on F1 weekend in 2022. In particular, the all-female Championship will be present in Miami, Barcelona, Silverstone, France, Hungary, Japan, Austin, and Mexico. Hence, following the announcement from Motorsport UK that Russian drivers won’t be allowed to race in the United Kingdom as a consequence of the war in Ukraine, a confirmation of Irina Sidorkova for the season would also mean she wouldn’t be allowed to race in Silverstone.

By Abby Bathurst19 hours ago

Today, set to take the track for day 2 are as follows:

Finally, while the only confirmed drivers so far are Chadwick, Powell, and Kimilainen, the first eight drivers classified in the 2021 season are also all automatically admitted to the Series. Hence, a return of Marti, Moore, Wohlwend, Pulling, and Visser is expected, leaving space for twelve yet-to-be-confirmed drivers.