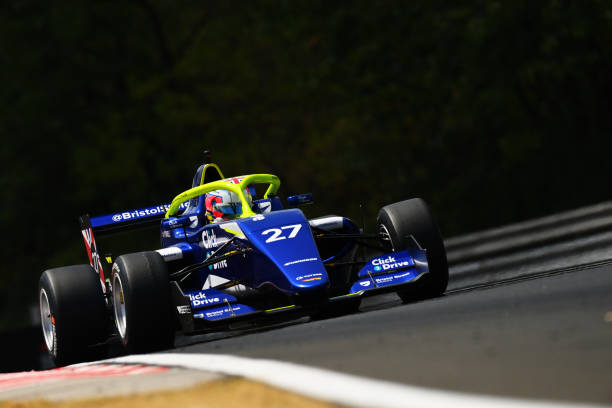 BUDAPEST, HUNGARY - JULY 29: Alice Powell of Great Britain and Click2Drive Bristol Street Motors Racing (27) drives on track during practice ahead of W Series Round 5 at Hungaroring on July 29, 2022 in Budapest, Hungary. (Photo by Dan Mullan/Getty Images)

W Series: A new winner this season in Hungaroring

Alice Powell takes her first win this season in Hungary

W Series took to the track for the sixth race this season, which saw Alice Powell take victory at the Hungaroring.

Yesterday, tables had turned during the Qualifying session for W Series. Jamie Chadwick is leading the championship after consecutive wins in every race so far. However, yesterday she failed to achieve pole position. Instead, Alice Powell of Click2Drive Bristol Street Motors scored her best result this season, taking pole for today’s race.

All eyes were on Chadwick and whether or not she could work her way from fifth onto the podium. She told FormulaNerds that she is “confident in the wet”, but her focus is to “keep her head down and we’ll see.”

Powell was joined on the front by Beitske Visser, who scored pole last time out at Paul Ricard. Between them and Chadwick sat Nerea Martí, who achieved a W Series podium at Hungaroring last season, and Marta Garcia.

As the cars sat on the grid, before their formation lap, it was clear to see the difference on the track. Powell and everyone on her side had the advantage as they were on a dry line, compared to the other side of the track that was very clearly wet.

So, here’s what happened in the sixth race of the 2022 W Series season.

Much like the Formula 3 Sprint Race earlier, W Series started behind the safety car. The formation lap saw the Quantfury car of Nerea Martí go wide onto the grass, through the bollard. This incident has been investigated by the stewards.

As the safety car pulled in, it was pedal to the metal as the cars began to race. Powell crossed the line and had a good restart.

Beitske Visser was following close behind, putting pressure on the race leader. Visser performed a great move to try and get ahead of Powell, but the Click2Drive driver held onto to her lead. Chadwick also had a good start as she turned fifth into fourth straight away.

A yellow flag was brought out on the opening lap as teammates Belen Garcia and Nerea Martí came together at Turn 5. B. Garcia went down four positions into P11, whilst Martí dropped down to P18.

Another yellow flag was brought out with 15 minutes to go. Jessica Hawkins ended up spinning after some contact with Emma Kimilainen, after having moved up four places. Billie Monger called the incident a “balance” between the two whilst commentating.

As a result of this Kimilainen returned to the pits as she suffered some damage. She then retired from the race.

Bianca Bustamante then spun coming out of Turn 9. She got the car started again but it was clear that she had sustained damage. Unfortunately, she couldn’t get the car back into the garage, having to stop in the entrance to the pitlane.

Race control decided on a safety car to neutralise the race whilst Bustamante’s car was removed from track. This was unfortunate timing for the Scuderia W teammates, Sarah Moore and Abbie Eaton, who were both battling each other for P7 and P8.

The two teammates, however, are also under investigation for overtaking under the safety car. Moore got through into P7 but the results of the investigation will be determined after the race.

Whilst the safety car was out, it brought M. Garcia and Pulling up to the top three, with the Spaniard in the lead.

Fastest lap after fastest lap was set as Chadwick made her way into a podium position, overtaking Marta Garcia of CortDAO. The Brit was then on the hunt to close the gap to Visser and Powell to see if she could clinch her eighth consecutive race win in W Series.

Further down the field it was Abbi Pulling vs Kimilainen. The latter who was on the charge lost out to Pulling, and Hawkins who came through to take P6, with Pulling ahead.

Juju Noda made a great move against Tereza Babickova as she went on the inside, gaining the position. This put her up into P13.

Fight for the lead

Whilst Powell was defending her lead against Visser’s attacks, Chadwick managed to get closer to the two. She set the fastest lap whilst getting into less than a second behind Visser. That made it a second covering the top three.

Chadwick performed an aggressive overtake on Visser, getting into P2. She was late on the brakes and defended against Visser to then begin her charge on Powell.

With five minutes to go, the safety car ended. Powell needed to catch Chadwick out and keep her lead. Powell decided to go for the early restart, maintaining her lead, but Chadwick wasn’t too far behind.

The gap between Powell and Chadwick was reduced to only +0.385 seconds with only one minute left. Powell looked comfortable in the race lead and held onto it until the chequered flag.