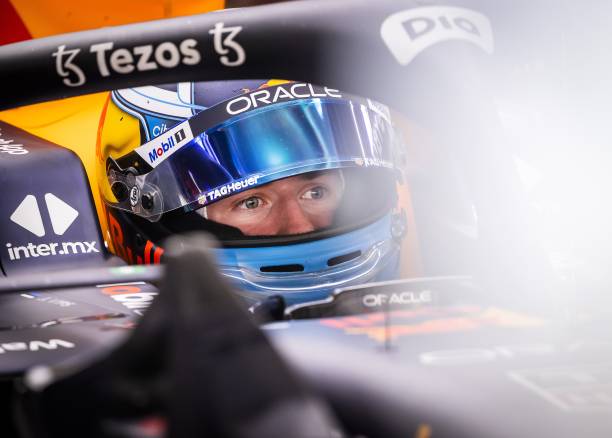 BARCELONA - Juri Vips (Oracle Red Bull Racing) during the 1st free practice session ahead of the F1 Grand Prix of Spain at Circuit de Barcelona-Catalunya on May 20, 2022 in Barcelona, Spain. REMKO DE WAAL (Photo by ANP via Getty Images)

Juri Vips has shared his thoughts on his performance so far

The Red Bull Junior Driver jumped into Sergio Perez’s RB18 for the session, which was spent collecting data and aero mapping. Speaking to Formula 2, Vips described the experience as “just amazing, as a racing driver you always want more so I wish I could have done a push lap in the end but I had a set program to go through where I couldn’t push, unfortunately. But the whole experience was just amazing.”

Vips also ran in Formula 2 for Round 4 proving a very hectic Friday schedule. The pressure did not seem to falter Vips as he qualified P2 after a last-minute flying lap, despite saying he felt “lost” on the first few laps.

However, the Hitech Grand Prix driver found heartbreak during the Sprint Race, spinning at Turn 4 leaving him in the gravel and out of the race. This was a similar move to that of teammate Marcus Armstrong in Friday’s practice session.

His bad luck continued into the Feature Race after a slow start off the line, he lost a place to Frederik Vesti. Gambling with the strategy, Vips was the first into the pits to switch to the hard tyre. He was however subjected to a slow pit stop after an issue on the front left.

The long stop meant he lost position to Jake Hughes and came out at the back of the field. Vips then struggled to move through the field after suffering brake issues. He crossed the line P17 leaving the weekend without a point.

This was not the weekend the Estonian driver will have hoped for after only taking two points from qualifying during Round 3 in Imola. Reflecting on his driving style Vips commented that the “problem this year, is that we’ve been very, very strong in qualifying, but in the Feature Races I just need to take a step down.”

Vips started the season on the front foot finishing P7 in the Sprint Race and P3 in the Feature Race, bringing home a strong points haul. Moving into Round 2 in Jeddah, the Red Bull Junior saw the podium once again as he finished P2 in the Sprint Race.

He also managed to clinch the final point scoring place of the Feature Race finishing P10. Imola proved another difficult round despite Vips qualifying on pole. During the Sprint Race, the Hitech driver ran wide leaving him to battle at the back of the field finishing P15. His luck did not improve moving into Sunday’s Feature Race. He started in pole position, but spun off, consequently ending his race prematurely. When speaking to FormulaNerds, Vips said the incident was “a clear mistake from my side just over-pushing and desperate to recover from a bad start.”

Vips currently sits P9 in the Drivers Championship with 30 points after four rounds. He currently sits behind two of his fellow Red Bull Junior Drivers Jehan Daruvala and Liam Lawson, who sit P3 and P4 respectively.

As the drivers look to the second race of the doubleheader, Vips commented on the proximity of the races saying “I think it’s really good that we have Monaco straight after,” went on to say “after you have a terrible race you just want to immediately jump into the car and get some points.”