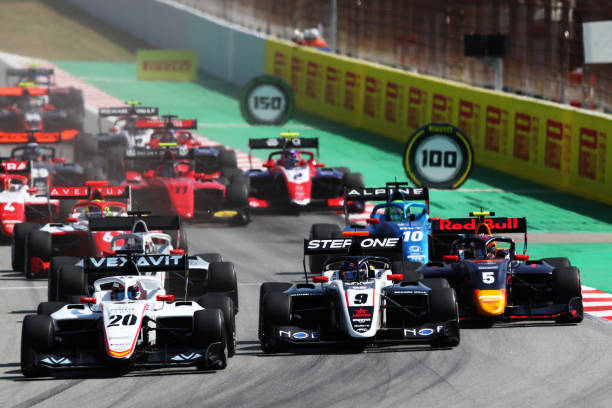 BARCELONA, SPAIN - MAY 21: David Vidales of Spain and Campos Racing (20) leads Juan Manuel Correa of United States and ART Grand Prix (9), Jak Crawford of United States and Prema Racing (5) and the rest of the field at the start during the Round 3:Barcelona Sprint Race of the Formula 3 Championship at Circuit de Barcelona-Catalunya on May 21, 2022 in Barcelona, Spain. (Photo by Joe Portlock - Formula 1/Formula Motorsport Limited via Getty Images)

Starting from reverse grid pole, Vidales got away cleanly ahead of Juan Manuel Correa and Jak Crawford. Further down the pack there were no major incidents as everyone began the 20 lap fight for position.

Everything stayed relatively stable on the first lap, with the top six all maintaining the positions they started in. A little further back Alex Smolyar improved from ninth to seventh.

On lap five DRS was enabled, and Crawford began putting pressure on Vidales for the race lead. Hunter Yeany was the first driver to have an incident, pitting with front wing damage.

By the end of lap 6 the top five were still running in the same positions they started in, remaining uncharacteristically calm for a Formula 3 race. But Crawford was closing in on the lead as Victor Martins began losing power and dropped out of the top 10.

Martins retired from the race with a mechanical issue on lap eight, as Van Amersfoort’s Franco Colapinto became the next driver to suffer a problem. His engine cover came loose, and fell off a lap later. He was the second driver to retire.

Battle for the Lead

By lap 12 Crawford had fully caught up to Vidales and was ready to make his move. Going into the first corner aided by DRS, the American driver went side by side with the Spanish driver. Vidales defended hard and Crawford ended up going over the kerbs in an effort to stay on the track. Crawford held second place, but lost a good 1.5 seconds on Vidales.

A little further back, Caio Collet snagged fourth place from Kaylen Frederick, who himself instantly came under pressure from Smolyar. Also under a lot of pressure was Prema’s Oliver Bearman, who was slowly losing places and eventually slipped out of the points.

On lap 17 a battle for third place began between Correa and Collet. Correa did well to hold the MP Motorsport driver for a couple of laps, but Collet got him in the end and took the final place on the podium.

Late in the race, Hitech’s Nazim Azman retired as Correa and Smolyar battled for third. In an incident not dissimilar from Vidales and Crawford’s, Smolyar went off the track and slipped back to sixth.

But ahead of them all was the rookie Vidales, who came home to take a home win for both himself and the Campos team in just his fifth race in Formula 3. Behind him was an agitated Crawford, and Collet managed to maintain third.

It’s not over yet for Vidales though, who faces an investigation for his incident with Crawford on lap 12. The stewards will be busy investigating several incidents following today’s race, one of them involving the race leader and a potential change in the order.