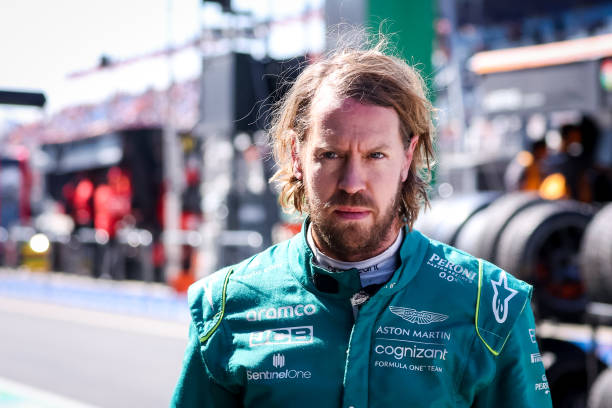 Aston Martin still say that Sebastian Vettel is still pushing hard, despite the German retiring at the end of the season.

The German announced his retirement just before the Hungarian Grand Prix, leaving many sad.

The 35-year-old has endured two tough seasons at Aston Martin. Vettel admitted that he expected more from the performance of the car.

It was revealed that the race in Austria was enough to decide to retire at the end of the season. The German was hit by Alex Albon and Pierre Gasly and was fighting outside of the points.

The four-time world champion joined the Silverstone team after finishing fourth in the 2020 constructors’ standings.

Aston Martin were expected to be the third quickest car once again, considering the new regulations were pushed back a year. However, new minor floor regulations were applied in 2021, hampering cars with the low-rake philosophy.

The main victims were Mercedes and Aston Martin, as the Silverstone team had a very similar car to Mercedes in the 2020 season.

The current season has been even worse for Aston Martin. They find themselves in ninth, after starting the year badly. The team even completely changed their car philosophy during the Spanish Grand Prix. However, the car is still not performing greatly and is heavily track dependant.

Vettel is not on a “farewell tour”

Despite the Germans career coming to an end, Aston Martin boss Mike Krack says he is still committed as ever. The 50-year-old also claimed that Vettel is not on a “farewell tour”:

“We will for sure have a farewell in Abu Dhabi, but until then, it’s not really on our mind that we go now around the world and it is always the last – not at all.”

There are still tracks where Aston Martin can be competitive

Aston Martin had a shocking weekend last week at the Italian Grand Prix. The AMR22 suffered heavily from drag, costing them dearly on the straights. It was found that a Formula 2 car went quicker on the straight than Vettel did during his qualifying attempt.

However, the AMR22 suits tracks that require more downforce and low-speed rotation. This makes the next race in Singapore a potentially good race for the Silverstone team.

Another positive for Aston Martin is having Sebastian Vettel. The German has won at Singapore five times throughout his career, clearly liking the track.

Mike Krack pointed this out, saying that the car suits higher downforce circuits more: “I think we have a couple of races to come where the car will be more competitive, and you have seen in some forms, the potential to go into Q3 was there.

“So we have the potential and I think this is also encouraging for the races to come.

“Singapore was always a track where he performed very, very well, so we have high hopes that we achieve something good with him from now to the end.”

It is no secret that Vettel has always pushed to the maximum, trying to extract everything from the car. His teammate Lance Stroll jokes about how long the German spends during the race debriefs, analysing every little detail.

Aston Martin performance director was asked whether the four-time world champion has stepped his foot off the gas with retirement approaching. McCollough responded:

“He is the ultimate professional really, so I would say no to that. Maybe he is a bit more relaxed in himself, but I wouldn’t see that in the engineering office or the way he drives the car.

“Sebastian is a bit of a machine from the work side of things.”

The Briton has also praised the Germans impact on the team, saying it has been an “utter pleasure” to work with him.

“He has brought a lot to the team in how we operate and how we look at things. A very inquisitive mind, great fun to be with but he also understands how to lift the team from a morale side of things really well.

“It has been an utter pleasure and I’m looking forward to the final races with him.”