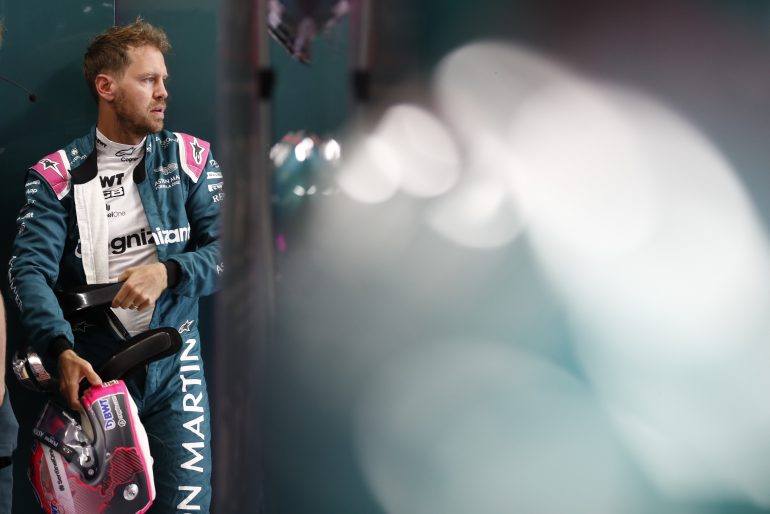 Vettel on sustainability: “I’d like to see the issue gain more momentum”

The designated time in the pre-race ritual for taking the knee to show respect for discriminated people with the message “End Racism” was cancelled last week. Sebastian Vettel, who is known in Formula 1 for his driving skills and activism, takes on a sceptical view of this change in a conversation before the launch of the new Aston Martin challenger AMR22.

“I hope that as drivers, we find a way to get together and find a slot of still expressing topics that are important to us.

“Probably not all the drivers care. But I think there’s some that really do care. And it’ll be great to get together.”

However, drivers will still get the chance to make the gesture voluntarily.

Vettel is also known to be active in the field of environmental awareness and climate change.

Last year he built a beehive with children at the track in Austria. At Silverstone, he joined fans in collecting rubbish at the end of the weekend.

His past helmet design was also a reminder that water is essential for the survival of every living thing on this planet.

Vettel wishes Formula 1 would take its task more seriously and follow up with action.

“I’ll say, one thing is what you do, but what I would like to see is the sport as a whole taking it more seriously. Take more action. I think we just had a question similar [to the cancellation of the pre-race ritual]. Rolling out a banner with many things on it is great. It’s better than nothing, but at some point, it falls a bit flat, and you have to focus on doing things.”

He firmly believes that racing must adapt to changes in the climate and the environment. F1 will take a step in the right direction when alternative fuels are used in the next few years.

“I think it is imperative that more needs to be done and that new paths need to be taken for the future. Because I think fossil fuels are going to die out.

“We’ve got a few things going on that I’m looking forward to. But overall, I’d like to see the issue gain more momentum and people become more aware. And they discover an area where they can make a difference–that can be small, that can be big. It doesn’t matter. I think it’s about understanding and doing.”

So, the planning for this year in Vettel’s out of track actions still leaves a lot open, but we can remain curious.