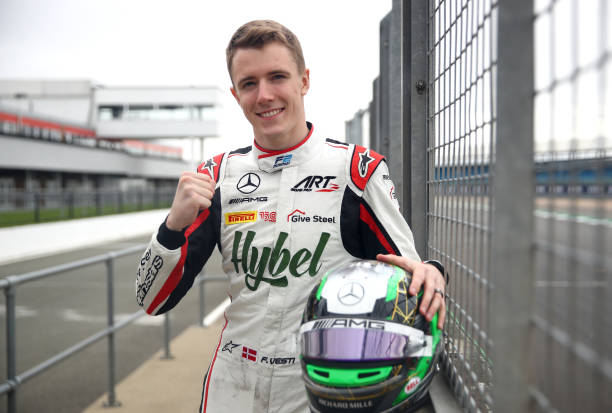 NORTHAMPTON, ENGLAND - JUNE 30: Sprint Race winner at Round 6:Baku, Frederik Vesti of Denmark and ART Grand Prix (9) poses for a photo during previews ahead of Round 7:Silverstone of the Formula 2 Championship at Silverstone on June 30, 2022 in Northampton, England. (Photo by Joe Portlock - Formula 1/Formula Motorsport Limited via Getty Images)

Vesti: “The potential for pole was there”

Frederick Vesti narrowly missed out on pole in F2's Qualifying

ART Grand Prix’s Frederick Vesti reviewed his qualifying lap that saw him put his car on the front row for Sunday’s Feature Race.

Formula 2 completed their first two sessions of round seven at Silverstone, which saw a maiden pole sitter. Times were competitive as drivers completed their flying laps but it was American Logan Sargeant who put it on pole with a time of 1:38.432 for the first time in F2.

Frederick Vesti pushed hard in the session as he found the pace to achieve his highest qualifying finish this season. His teammate Théo Pourchaire is two places behind him in fourth with championship leader Felipe Drugovich in an ART sandwich in third.

At the beginning of the season, in the first three rounds, Vesti didn’t have the start he would have liked. He suffered a DNF in the first Feature Race in Bahrain. His qualifying times put him outside of the top 10 until Barcelona where he put it P3. The Spanish Grand Prix was a great weekend for the Dane, but Baku was even greater.

On the streets of Azerbaijan, Vesti scored his maiden F2 win in the Sprint Race. The success and positive feeling have likely carried forward to one of his favourite races on the calendar. Silverstone.

Here, Vesti was 0.107 seconds off Logan Sargeant’s pole lap. When speaking about the time difference between the top two times, Vesti said that “everyone thinks they can do pole”. So far this season, we have seen only three drivers take pole; Sargeant increases that number to four, joining the likes of Jack Doohan, Juri Vips and Felipe Drugovich.

Previously, Vesti has said that it is quite “difficult to put the perfect lap” here around Silverstone. He added that there are a lot of things that have to go right.

FormulaNerds asked the young driver what those aspects where that went right to aid his success at achieving P2. Vesti said:

“One thing that went really well was Sector 2, where I did the purple, fastest form. But Sector 1 and Sector 3 were not that clean. It’s a bit frustrating because…it’s only one tenth to Logan. I’m sure Felipe feels the same. Everyone thinks they can do pole.”

He continued saying that “the potential for pole was there”, and now his focus is on looking ahead to the rest of the season.

Today, Vesti will be starting in P9 for the Sprint Race. Last time out, he won the Sprint improving on his then-best result of P7.

He showed that the ART has the pace around Silverstone and the track clearly has some aspects that play to Vesti’s strengths.

Will we see him progress through the field today? Will he beat his teammate who starts the Sprint two places higher on the grid?