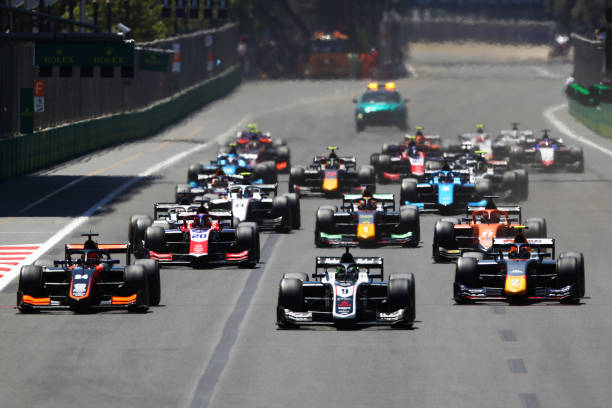 BAKU, AZERBAIJAN - JUNE 11: Frederik Vesti of Denmark and ART Grand Prix (9) leads Jake Hughes of Great Britain and Van Amersfoort Racing (24), Jehan Daruvala of India and Prema Racing (2) and the rest of the field into turn one at the start during the Round 6:Baku sprint race of the Formula 2 Championship at Baku City Circuit on June 11, 2022 in Baku, Azerbaijan. (Photo by Joe Portlock - Formula 1/Formula Motorsport Limited via Getty Images)

Jehan Daruvala had a commanding lead of the Sprint Race in Baku, but it was ART’s Frederik Vesti who achieved his maiden Formula 2 victory after an incident-ridden race.

Vesti had the best start of the top three, jumping Daruvala and polesitter Jake Hughes into Turn 1. But after a bit of a mistake he was quickly overtaken by the top two, and settled back into third place.

Daruvala, who had taken the lead from Vesti, instantly began pulling a gap to Hughes, as everyone further back settled into place. Virtuosi’s Jack Doohan sustained front wing damage on the first lap, which he carried until the black and orange flag was waved at him and he was forced to pit to fix it.

By Lap 5 Daruvala’s lead was up to almost three seconds, but DRS saw the rest of the pack start to bunch up more. One lap later, Vesti made a pass on Hughes to take second place.

This pass marked the beginning of a number of passes on the polesitter, who began to steadily slip down the grid as the race went on. The next driver to get past him was Logan Sargeant, making it into the podium positions.

Several laps later Hughes was passed by Marcus Armstrong and Felipe Drugovich, falling down from first to 11th in just the first ten laps.

It was the fight for eighth on the grid that started the chain reaction of incidents that continued for the rest of the race. Theo Pourchaire was closing in on Juri Vips, with Dennis Hauger not far behind them in tenth.

Hauger had set the fastest lap so far, and made a move on Pourchaire for ninth place. But he locked up going into the corner and hit the wall, allowing Pourchaire back ahead and bringing out the first Safety Car on Lap 14.

The Safety Car lasted until Lap 17, when Daruvala pulled off a flawless restart to maintain the lead of the race. Sargeant in third, however, locked up and lost the place to Richard Verschoor.

Not long after, Vips had an incident with Enzo Fittipaldi, taking the two of them into the runoff. Vips managed to get back on track, but Fittipaldi’s car needed to be recovered, so the Safety Car was brought back out less than a lap later.

A less than perfect restart

Daruvala had even more pressure at the Safety Car restart, which happened on Lap 19. This time he locked up, allowing Vesti to take the lead. Again, the green flag wouldn’t last for long, as an incident between Lawson and Verschoor saw Verschoor into the wall and Lawson into third place.

the Safety Car was deployed for the third and final time, again after less than one racing lap. The safety team quickly recovered Verschoor’r car, and the drivers resumed racing on Lap 21 for the final lap of the race.

Vesti managed a good restart and held off Daruvala. Daruvala, in turn, managed to hold off Lawson to maintain second as yellow flags stopped too much fighting in the first and third sectors.

After a stressful end to a crazy race, Vesti took his maiden Formula 2 victory ahead of Daruvala and Lawson. Armstrong was in fourth, followed by Drugovich. The rest of the points finishers were Sargeant, Porchaire, and Ayumu Iwasa.

Vips, who lost out on a good finish today, will start on pole for tomorrow’s Feature Race.