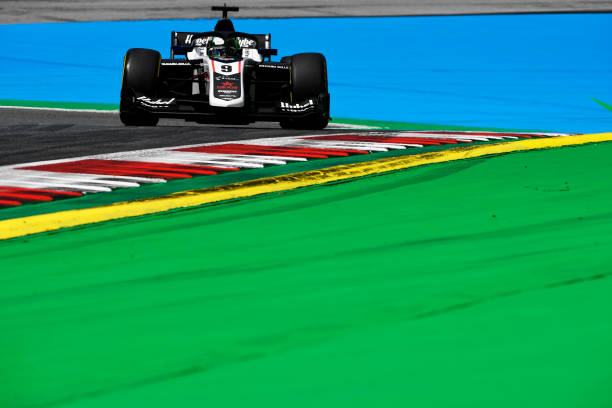 SPIELBERG, AUSTRIA - JULY 08: Frederik Vesti of Denmark and ART Grand Prix (9) drives on track during practice ahead of Round 8:Spielberg of the Formula 2 Championship at Red Bull Ring on July 08, 2022 in Spielberg, Austria. (Photo by Rudy Carezzevoli - Formula 1/Formula Motorsport Limited via Getty Images)

The Mercedes Junior driver was the man to beat in today’s eventful qualifying session. Juri Vips took P2 with a 1:14.158 while Logan Sargeant claimed P3 with a 1:14.288.

Ayumu Iwasa led the pack out of the pitlane getting qualifying underway.

Iwasa set the first representative time of 1:15.287 however this was quickly displaced as times began to tumble, leaving him P8. Jack Doohan claims the top spot with a 1:14.559 over four-tenths clear of Logan Sargeant in P2.

Championship leader Felipe Drugovich temporarily claims P2 with a 1:14.825. However, a battle between the Silverstone race winners sees Sargeant reclaim P2 while Doohan kept the top spot, improving to a 1:14.414 beating Sargeant by only 0.010 seconds.

Sargeant however fell victim to track limits as his lap time was deleted.

Going into the first break in track running Doohan topped the times with Drugovich four-tenths behind while Juri Vips claimed P3.

With 13 minutes remaining, Jake Hughes and Amaury Cordeel tried to take advantage of the quiet track time.  Hughes improved to P2 however his lap time was quickly deleted leaving him in P9.

Cordeel further displaces him as he takes P2 with a 1:14.457 on the ever-improving Red Bull Ring.

Roy Nissany lead the pack out of the pits with ten minutes remaining.

With five minutes remaining Drugovich takes provisional pole with a 1:14.315. He was quickly displaced by Doohan with a 1:14.284.

Vesti quickly pushes Doohan down the order snatching provisional pole with a 1:14.123 despite struggling to set a representative time all session.

Doohan saw his lap time deleted placing him in P3.

As the track improved the midfield order began shuffling. This however was combatted by race control deleting times for track limits.

This however benefitted championship contender Theo Pourchaire who struggles to set a top lap time leaving him P12. After lap time deletions the ART driver saw himself finish P9 and starting on the front row tomorrow.

The top ten qualified as follows:

By Jay Winter3 days ago