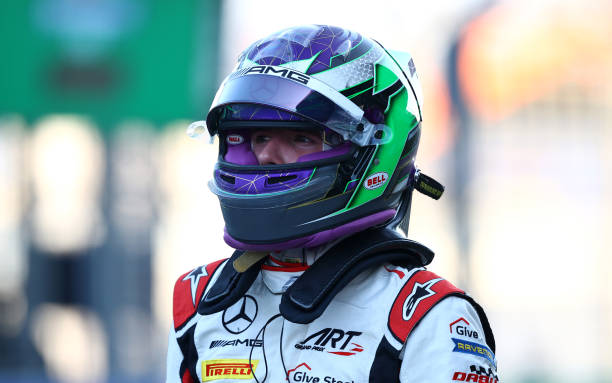 ZANDVOORT, NETHERLANDS - SEPTEMBER 04: Third placed Frederik Vesti of Denmark and ART Grand Prix looks on in parc ferme during race 2 of Round 6:Zandvoort of the Formula 3 Championship at Circuit Zandvoort on September 04, 2021 in Zandvoort, Netherlands. (Photo by Bryn Lennon/Getty Images)

Vesti: “Qualifying in F2 is everything”

The Danish driver knows how important grid position can be

Frederik Vesti is already a race winner in Formula 2, but he hasn’t scored points since before the summer break.

Ahead of the final round of the triple header, Vesti talked to FormulaNerds about why the past few weekends have been a struggle, and what he’s hoping to improve on.

It was a slow start for Vesti in his rookie season of Formula 2. While his ART Grand Prix teammate Theo Pourchaire won the first Feature Race of the season, Vesti didn’t score any points until Round 3.

From there, he made steady improvements. He scored his maiden podium the following round in Barcelona. Then, in Baku, he took his first win in the Sprint Race. Finally, Vesti took his maiden pole position in Austria.

After Austria were the rounds in France and Hungary, during which Vesti finished in the top five of all four races.

Vesti headed into the summer break with plenty of momentum, but it didn’t last. Coming back at Spa and Zandvoort, he qualified 14th and 11th respectively and was unable to score points.

The Danish driver is currently tied for tenth place in the standings with Marcus Armstrong. But he’s hoping his luck will improve in Monza, and he knows exactly where he needs to improve.

FormulaNerds asked Vesti ahead of the weekend about his tough couple of rounds.

“Qualifying, as you know, in F2 is everything, and if you don’t start in the front it can be very difficult to make any good results, and this is pretty much what happened to me in Spa and Zandvoort.

“In Spa, I was under the limit, we also probably didn’t have the fastest car on the grid, where in Zandvoort we were actually quite strong but both me and Theo had accidents. But I had mine in Free Practice, which put me on the back foot for quali. So this weekend is focused on a clean and strong Free Practice, and then we should be in the mix for quali.”

Vesti also told Autosport that his rookie season hasn’t exactly been what he expected, but said that he knows he has the potential to improve.

“For me, it’s clear that I have the pace to be right at the front, but the consistency in quali is where I need to make the step so I don’t have these bad qualifyings like the last weekends. If I can achieve that, I’m very confident that I can do a consistent, good job.”

There are only two rounds left of Vesti’s rookie Formula 2 season, starting this weekend in Monza. From there, he’ll have two months to wait until the final round at Abu Dhabi.