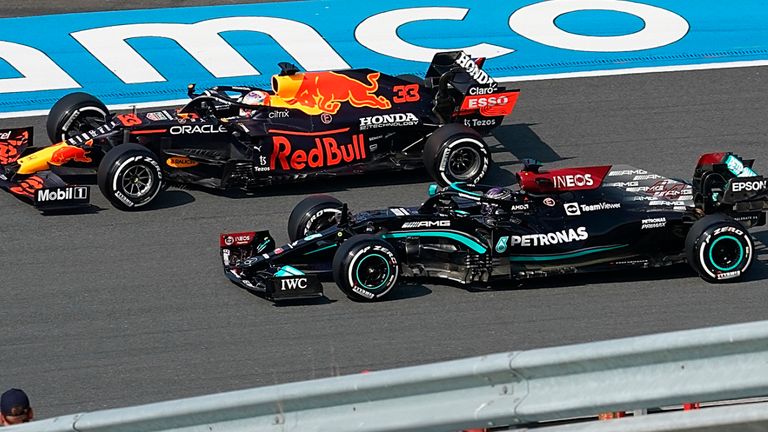 Verstappen vs Hamilton: Who will come up Trumps as the USGP?

8 words to excite F1 fans. Verstappen and Hamilton are on the front row. For the first time since Silverstone (and we all know what happened there) the championship rivals will be wheel to wheel off the line, but what else can we expect from the US Grand Prix…?

With Lewis and Max on the front row and no rain forecast, expect a close battle into turn 1. Sergio Perez is starting P3 on the grid, but crucially he’s on the clean side which could make a massive difference up the hill to the first breaking zone.

If Silverstone is anything to go by, there will be fireworks.

Charles Leclerc starts P4 for Ferrari, an impressive qualifying for him will inspire him to go for a podium charge throughout the race, with his teammate, Carlos Sainz, just behind him in P5.

Lower down the order, Bottas starts P9 after yet another (insert you’re joking, not another one! meme here) engine penalty. He was completely dominant last time out at the Turkish Grand Prix and he’ll definitely be using this momentum to power himself forward.

Vettel, Alonso and Russell are all at the back of the grid with PU changes, so expect them to pick their way up, as they’ll all hope to be fighting for points by the end of the race.

This is a race that many expect to be won and lost in the strategy calls, with the teams and Pirelli seemingly in agreement that it will be a two-stop race. Despite this, I’d suggest we’ll see at least one driver (possibly Perez) on a one-stop strategy in a bid to get the race win. The temperature throughout the race will be key in deciding the strategy, the warmer it is, the more the teams will be pushed towards a two stopper.

Bottas was the master of COTA in 2019. His task will be much harder this year starting P9, but he’s a man on a mission to prove Mercedes wrong at the moment. Never count out Valtteri Bottas.

A dry race is expected in Austin so the wet and intermediate tyres are unlikely to be needed, but they’ll be on standby just in case!

All the ingredients are here for a party in the USA, we just wait to hear those magic words… IT’S LIGHTS OUT AND AWAY WE GO!