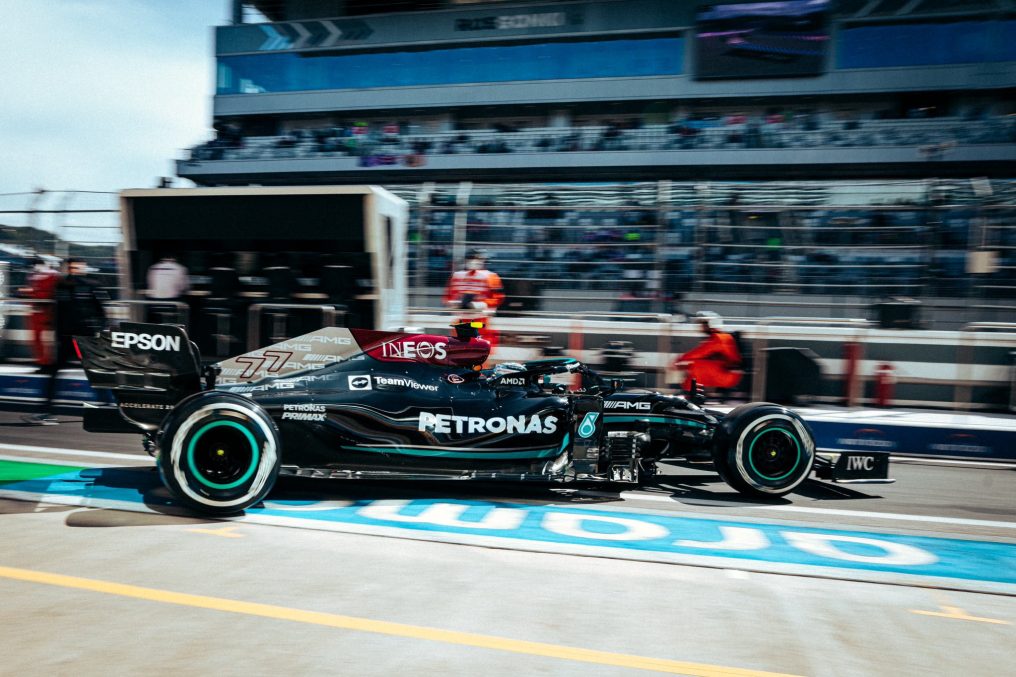 Valtteri Bottas continued his dominance in Sochi and topped the timing charts with a time of 1:33.593 at a track that has been dominated by Mercedes with 100% wins in the turbo-hybrid era.

The forecasts are showing a 100% chance of rain tomorrow, thus this FP2 session was vital in case qualifying is cancelled, the times may be used to determine the grid for Sunday.

Therefore with the weather looking disruptive and having a 3-grid place penalty coming into this weekend in Sochi, Max Verstappen has taken a new power unit this weekend and will be starting from the back of the grid for Sunday’s race. This will make the championship battle even more interesting!

Lando Norris set a strong fourth fastest time ahead of an impressive performance from Esteban Ocon.

Both Ferraris seem to be doing well in these conditions with both cars finishing in the top 10 – Carlos Sainz finished in P7 and Charles Leclerc in P10.

Championship contender Max Verstappen set the sixth-fastest time – as one can assume he wasn’t trying to maximise his full potential with a penalty this weekend.

Fernando Alonso and Sebastian Vettel completed the top 10 in eighth and ninth.

Incidents in the session

Daniel Ricciardo stayed in the garage and joined much later into the session as the team have decided to switch his power unit after finding an issue this weekend – but will not take a penalty as it will use his first engine from the season.

There was a moment in the pit lane with Mercedes as Hamilton had the magic button on again and didn’t stop on his mark in the pit lane, sending one of his mechanics flying. Thankfully he is okay and Hamilton immediately apologised and checked he was okay.

Charles Leclerc took a spin halfway in the session but didn’t cause any damage.

Antonio Giovinazzi brought out the red flag with just over 20mins of the session remaining after having a big shunt into the exit of turn 9 – the same place as Leclerc’s spin – and caused a lot of damage to the rear of his car.

At the end of the session, Pierre Gasly took too much of the curb at Turn 2 and dislodged his front wing bringing out the yellow flag in sector 1.

As mentioned before, rain has been forecasted for tomorrow with an expected 2.5mm-3mm of rainfall to hit the circuit during qualifying.

This will obviously cause a delay to the session with the stewards trying to set plans in place, especially after the events in Spa.

They are thinking of holding the qualifying on Sunday if tomorrow’s session does not go ahead and cannot be held at some point on Saturday afternoon.

It will most likely be a long day tomorrow so keep your eyes peeled.

After a few crashes this season, Verstappen was expected to take a fourth power unit change that would award him a penalty to start at the back of the grid on Sunday.

The team, therefore, decided this weekend would be best to take the penalty – as Hamilton is also due to serve this at one of the races this season. This track has favoured Mercedes and already having a 3-place grid penalty, they have taken their chances in Sochi.

But he radioed his team during the race simulation part of the session saying “Impossible to pass with my top speed,” as he struggles to get past Nicholas Latifi.

Will this mean he won’t be able to move much higher up the field and face a big deficit in points this weekend in his championship battle?