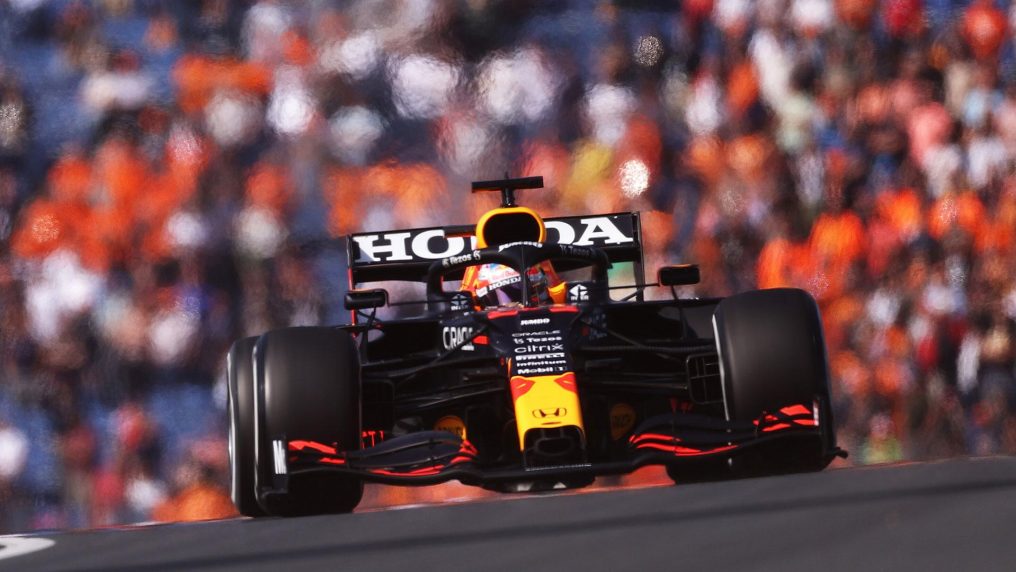 Verstappen looked set to take a dominant pole after a rapid first run in Q3, but Hamilton nearly pipped him at the end of the session, narrowly missing out on upsetting the thousands in attendance.

The other Mercedes of Valtteri Bottas was third, 0.337 secs off the pace.

The only negative for Verstappen will be that his teammate Sergio Perez couldn’t get out Q1 in an incident-filled qualifying, giving Mercedes a slight advantage for the race.

Pierre Gasly was an excellent fourth for Alpha Tauri, ahead of the Ferrari’s of Charles Leclerc and Carlos Sainz.

Antonio Giovinazzi made it into Q3 for only the second time this year for Alfa Romeo and was an impressive eighth, ahead of the Alpines of Esteban Ocon and Fernando Alonso.

A qualifying full of drama

There were a few shocks in Q1 with Verstappen’s teammate Perez failing to advance and Aston Martin’s Sebastian Vettel, both the victims of traffic.

Perez narrowly missed the chequered flag ahead of a planned final flying run and Vettel was held up perilously by Haas’ Nikita Mazepin.

The drama continued in Q2 when both Williams cars skidded off.

There was potential for the Brit to get into Q3 again after a solid first run in Q2, but he pushed too hard at the final corner and lost the rear, clipping the barrier – despite a red flag delay and Russell managing to trundle back to the pits, he was unable to run again.

Then, soon after the restart to the session, Nicholas Latifi had an incident almost akin to Russell’s.
The Canadian lost the rear at Turn Eight this time and skidded acrosses the gravel and into the barrier, ending Q2 early – which was to the dismay of McLaren’s Lando Norris who was eliminated as he couldn’t complete another flying lap.

Russell did manage to qualify 11th, ahead of Aston Martin’s Lance Stroll.

For the first time this season, Norris failed to make it into Q3 and ended the day 13th, with Latifi and Yuki Tsunoda’s Alpha Tauri behind.

There was little doubt heading into Q3 that Verstappen would be on pole.

The Dutchman was electric in Q2 and far quicker than both Mercedes, it was a surprise to see Hamilton so close at the end of qualifying, showing how good the seven-time world champion’s final lap was.

But it was Verstappen who took the spoils after two excellent runs in Q3.

Mercedes will be hoping to mount a significant challenge on race day, with both of their cars at the top of the grid.

Perez in the other Red Bull missed out on the chequered flag in Q1 and will start from 16th, offering Mercedes a significant strategical advantage at Zandvoort, a circuit where overtaking could prove to be tricky.

Another big shock was Norris failing to make it into Q3 for the time this year.

The young British driver has been on red-hot form this year and is currently third in the drivers’ standings, but has appeared to struggle in The Netherlands so far this weekend.

His first lap in Q2 wasn’t good enough to see him into the top 10 and was prevented from going again due to the red flags caused by Russell and Latifi – having to watch his teammate Ricciardo compete in Q3 as the sole McLaren.

Norris didn’t seem to have his usual control over his car and could still be bruised after his heavy shunt at Spa last weekend – he starts Sunday’s race from 13th.