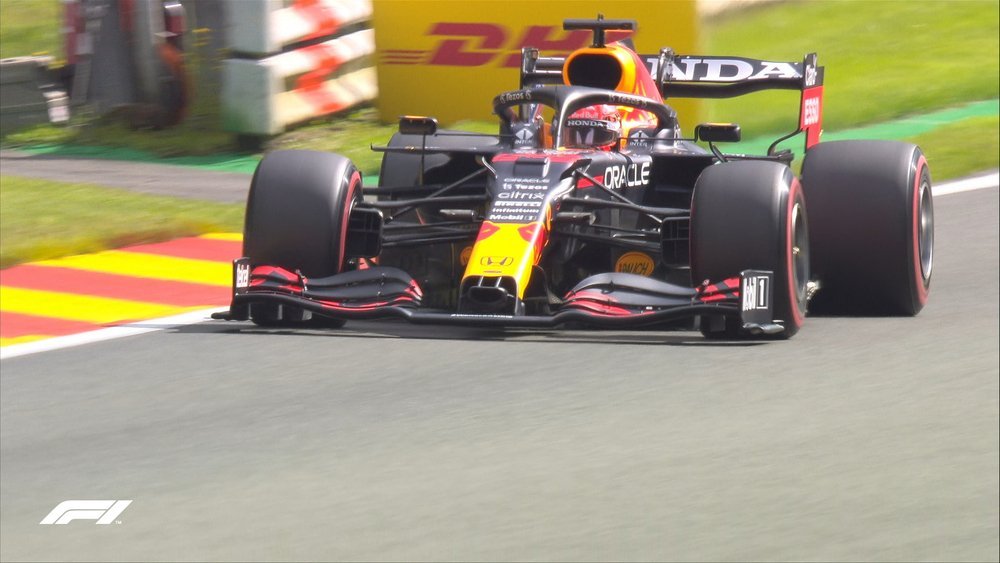 Verstappen responds in second practice at Spa despite crash

Verstappen lost the rear of his car at Turn Seven and crashed into the barrier, bringing out the red flag to close the session.

Mercedes’ Valtteri Bottas was second, 0.041 seconds behind the Red Bull.

Verstappen’s title rival Lewis Hamilton was 0.072 seconds off the pace in the other Mercedes, with the top three all setting their best times on the medium tyres.

Yet the track dried almost instantly, thanks to the F3 cars who had qualified before, and everyone quickly switched to slick tyres.

The session was relatively uneventful to begin with as the teams completed race simulation runs, but a spin by Alpine’s Esteban Ocon at Les Fagnes brought out yellow flags.

This was quickly followed by a heavy shunt for Ferrari’s Charles Leclerc who hit the barriers at Les Combes, triggering a late red flag.

Verstappen then crashed in the same sequence of corners as the Monegasque to bring out a second red flag, ending second practice early.

Ocon’s Alpine teammate was an impressive fourth, ahead of Pierre Gasly in the Alpha Tauri.

The Aston Martin’s finished sixth and eighth with Lance Stroll heading teammate Sebastian Vettel – the pair were split by Ocon.

It looked to be a better afternoon for Verstappen after ending the first practice session trailing Bottas.

The Finn had actually spent the majority of the session top of the timing sheets until Verstappen just pipped him before Leclerc’s crash brought out the first red flag of the session.

Verstappen then created another stoppage by losing the rear of his Red Bull at the exit of the high-speed Les Combes sequence and hitting the barriers – damaging the suspension at the rear of his car.

The Dutchman currently trails Hamilton by eight points in the drivers’ standings after two disappointing results before the summer break.

This crash isn’t what Red Bull would have wanted as they return to battle with Mercedes, and team boss Christian Horner stressed the need for a clean weekend after incidents for Verstappen at Silverstone and Budapest.

Charles Leclerc has run well at Spa before, taking his maiden F1 victory here in 2019 – but this wouldn’t have been the start to the weekend he was hoping for.

The two-time race winner lost control of his Ferrari at the Les Combes chicane and skidded into the barriers to end his session earlier than hoped.

The other scarlet car of Carlos Sainz didn’t fare much better and ended the session 11th.

A silver-lining for the Scuderia will be that main rivals McLaren, who they are battling in the championship for third-place, didn’t do much better.

Norris could only manage ninth while Daniel Ricciardo struggled again and ended the afternoon in 15th.

Could Friday be irrelevant at Spa?

Rain has been forecasted across this weekend.

Between first and second practice, the circuit was hit by a shower, however, this had largely cleared by the time the cars emerged in the afternoon, with drivers quickly switching from intermediate tyres to slicks.

But it’s highly likely that both qualifying and the race will be run under wet conditions, making set up decisions tricky for the teams.

It should also add some chaos to a race which is often eventful when it’s wet.