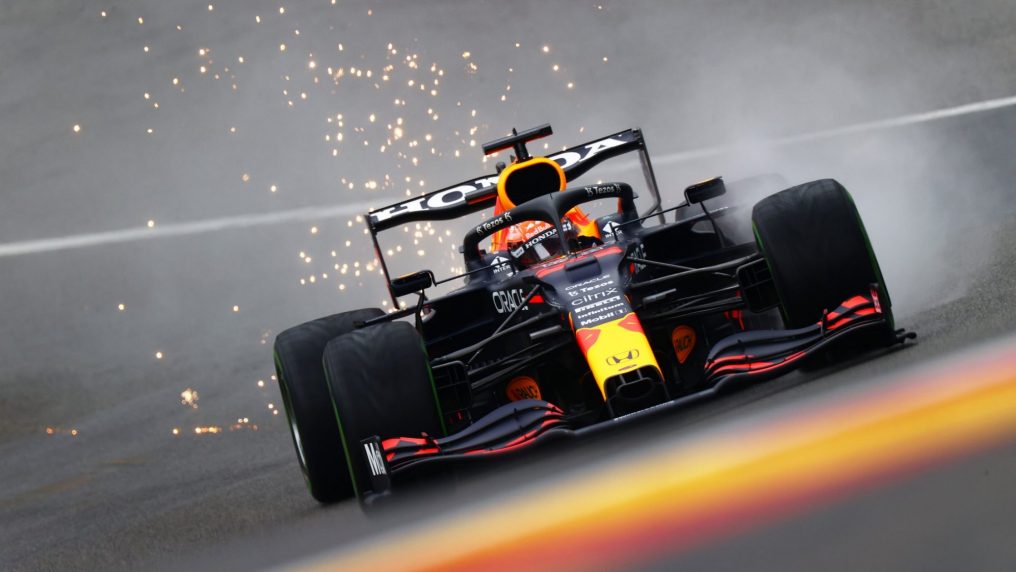 Verstappen on top but Russell excels in Spa qualifying

Max Verstappen took pole position ahead of the brilliant Williams of George Russell, who was just 0.321 seconds behind the Red Bull driver.

Russell produced an excellent final lap in Q3 to hold provisional pole until being pipped by Verstappen at the very end of the session.

The Brit was ahead of Lewis Hamilton, who could only manage third in the Mercedes, 0.013 seconds behind Russell.

It was a dramatic final stage of qualifying which was halted soon after it began after Lando Norris had a huge crash at Raidillon.

The McLaren driver was the first man to begin a flying lap in Q3 and the conditions caught him out with further rain falling after Q2 forcing the drivers from intermediate tyres to wets.

Norris was able to walk away from the incident and a lengthy red flag period followed.

After the stoppage, Hamilton set the pace in the first flying runs but was beaten by Russell, who was then just edged out by Verstappen at the end of the session.

Daniel Ricciardo was an excellent fourth in the other McLaren ahead of Sebastian Vettel’s Aston Martin.

Valtteri Bottas could only manage eighth in his Mercedes, and will also take a five-place grid penalty due to the incident he caused in Budapest before the summer break.

Esteban Ocon was ninth in the Alpine and Norris completed the top 10, but will likely start from the pitlane due to his impact with the barriers.

The record books will say that Verstappen took pole this weekend, but Russell was certainly the star of qualifying.

In Q1, both Williams cars went bold and used intermediate tyres while the rest of the field opted for wets, and the team initially managed to get both cars to the top of the timing sheets.

Russell was then able to comfortably get into Q3, while teammate Nicholas Latifi enjoyed his best ever qualifying in Formula 1 and will start the race from 12th.

The unexpected happened in Q3 as Russell looked to have secured Williams’ first pole position since the  2014 Austrian Grand Prix.

But the hype was ruined by a charging Verstappen who only beat the Brit by just 0.321 seconds in a far superior Red Bull car.

With questions still remaining over Russell’s future and whether he will be replacing Bottas at Mercedes next season, the Williams driver certainly bolstered his case here.

Verstappen headed into qualifying at Spa as the favourite for pole.

The Dutchman has bested Hamilton in all three practice sessions, topping two of them.

Although the drivers initially started the final stage of qualifying on wets, the red flag period allowed the track to dry, and the majority switched to intermediates after the stoppage.

But it looked like the seven-time world champion was going to produce another wet-weather masterclass as he put his Mercedes on provisional pole following the red flag period.

Verstappen managed to pull it out of the bag however with an excellent final lap which saw him go 0.334 seconds clear of Hamilton and also pip Russell to pole.

Heading into Q3, Norris was a serious contender for pole.

The McLaren driver had topped both Q1 and Q2 and looked in complete control in what were very tricky conditions.

But further rain fell between Q2 and Q3, forcing the teams to put on the full wet tyres rather than the intermediates they had used for the majority of qualifying.

Norris was the first man to set a flying lap in Q3 and lost control at Eau Rouge, skidding off into the barriers, triggering a red flag.

The British driver was able to walk away unharmed and apologised to his team for the crash over the radio, saying: “Sorry boys. I let you down there. We should have been on for a good one.”

The impact and repair job likely means Norris will have to start tomorrow’s race from the pitlane.

It wasn’t an ideal start to the weekend for Ferrari who couldn’t find any pace at Spa during practice.

Charles Leclerc’s crash at Les Combes on Friday added further misery to their time in Belgium – and things didn’t improve during qualifying.

Leclerc was only good enough for 11th, being pushed out by Ricciardo at the end of Q2.

Carlos Sainz was 13th in the other Ferrari.

Pole for @Max33Verstappen and P2 for @GeorgeRussell63 after a thrilling Saturday at Spa 🤩#BelgianGP 🇧🇪 #F1 pic.twitter.com/aI8fybQw0G