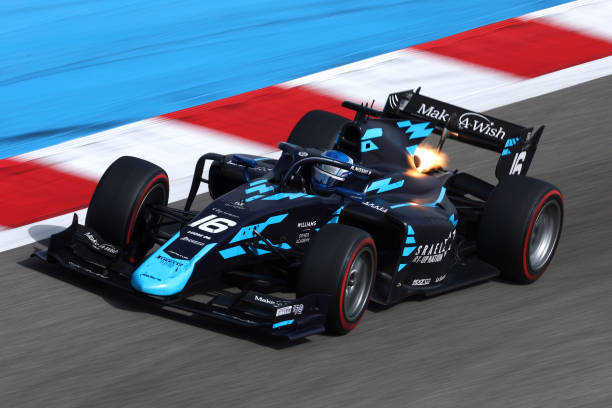 BAHRAIN, BAHRAIN - MARCH 20: Roy Nissany of Israel and DAMS (16) drives on track during the Round 1:Sakhir Feature Race of the Formula 2 Championship at Bahrain International Circuit on March 20, 2022 in Bahrain, Bahrain. (Photo by Lars Baron/Getty Images)

Verschoor on Nissany: “He should not have a license”

Verschoor achieved Sprint Race glory on Saturday after he took Trident’s first win in Formula 2 since 2016. but Sunday’s Feature Race saw him deeply frustrated and out of the race due to a scuffle in the midfield. The scuffle in question, involving DAMS driver Nissany, caused Verschoor an uncharacteristic fit of rage. He took to Twitter after the race to share his thoughts on the conflict.

On lap 24 Verschoor was caught up in a battle on track with Nissany and Carlin’s Logan Sargeant. The three way fight for 11th on the grid lasted for three whole laps, as Nissany dodged and weaved all over the track in an attempt to hold his position.

The group went three wide on more than one occasion, each of them desperate to come out on top. But of the three of them it was Nissany who was pegged by the commentators and drivers around him for his “dangerous” defensive moves that rarely involved staying on the racing line.

Verschoor’s race ended when he was tagged and spun by Enzo Fittipaldi, but all of his anger was directed at Nissany.  He said on the radio to his team “You better get me away from this guy.”

That wasn’t the only incident that Nissany was caught up in during the race. He also collided with Jehan Daruvala while defending for position, resulting in front wing damage for the latter.

After the race, a usually conservative Verschoor took to Twitter to make a few comments on Nissany’s style of defense.

By Selena Abu-Ras17 hours ago

“This is not racing. This is purposely driving someone off the track, not caring whether you will crash. This is over the limit and not acceptable, go choose another sport.”

“It’s honestly ridiculous, he should not have a license. It’s more than dangerous.”

While Fittipaldi received a time penalty post race for his contact with Verschoor, no investigation was made into the defending Nissany that Verschoor was so enraged by. He went on to finish eighth in the race, which puts him tenth in the points standings after the first round of the championship.