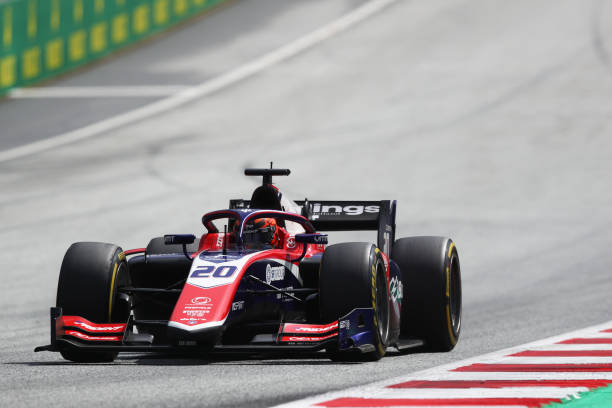 SPIELBERG, AUSTRIA - JULY 10: Richard Verschoor of Netherlands and Trident (20) drives on track during the Round 8:Spielberg Feature race of the Formula 2 Championship at Red Bull Ring on July 10, 2022 in Spielberg, Austria. (Photo by Joe Portlock - Formula 1/Formula Motorsport Limited via Getty Images)

Richard Verschoor was the man to beat around a very changeable Red Bull Ring today.

In contrast to yesterday’s Sprint Race, a very damp Red Bull Ring set the scene for today’s Feature Race. With the changeable conditions, the grid was very split on tyre choice, most opting for wets while the rest opted for slicks.

As the lights go out it’s Juri Vips who gets the best start off the line taking the lead. Ayumu Iwasa temporarily taking P2 however polesitter Frederik Vesti claims the place back.

The safety car is brought out as Marcus Armstrong is spun out by Jehan Daruvala at turn three. Cem Bolukbasi is also forced into the pits after sustaining front wing damage from first lap contact with Liam Lawson.

With the safety car coming in at the end of lap four Vips controls the restart well but not without pressure from Vesti behind.

Moving into lap six championship leader Felipe Drugovich falls through the field ending up at the back of the pack.

At the front of the field, Richard Verschoor is on the charge making his way into the lead of the race from P8.

Those taking the gamble on slicks charge to the front of the field while those opting for wets begin to peel into the pits.

At the front of the pack, Verschoor extended his lead to just over four seconds. Daruvala followed behind in P2 while Merhi sits in P3.

Merhi makes the move on Daruvala on lap 11 to take P2 making up an astonishing 19 places.

As the front runners start peeling into the pits Lawson moves into P2 while Verschoor extends his lead to 11 seconds.

At the back of the field, Doohan passes his teammate Marino Sato for P16 however the move sees Sato fall to last.

Moving into lap 16 Logan Sargeant began his charge through the field passing Dennis Hauger for P6.

Further back in the pack Vesti and Iwasa battle for P8 however Vesti sees himself pushed off the track.

Sargeant continues his charge passing Enzo Fittipaldi for P5. Moving into lap 17 he also passes his teammate Lawson after squeezing him off the track. A frustrating move however for Lawson as Fittipaldi also takes the opportunity to pass.

Following his earlier move with Iwasa, Vesti is handed a five-second penalty for leaving the track.

As we approached the halfway point Verschoor still proved dominant in the lead even after pitting.

Doohan also sees a five-second penalty handed to him for track limit violations.

Moving into lap 27 Doohan’s day goes from bad to worse as he was handed another ten-second time penalty.

Up front, Verschoor ran his own race extending his lead over Daruvala to just over five seconds.

With ten laps to go, championship contenders Drugovich and Theo Pourchaire battle for P14 however Pourchaire is unable to materialise on the move.

Moving into lap 33 Iwasa is the next driver to be handed a five-second penalty.

Calan Williams was the next to fall victim to track limits as he is handed a five-second penalty.

Track limits continue to flurry in as Lawson and Fittipaldi are both handed five-second penalties on lap 36.

Moving into lap 39 Merhi manages to pass Daruvala to claim P2 however this is short-lived as he is next to receive a five-second penalty.

Lawson’s day was also made worse as he received another ten-second penalty. Vesti was also handed the same punishment.

With a 13.7-second lead, Verschoor takes the feature race win however his Trident stopped on track before he could make it to the podium.