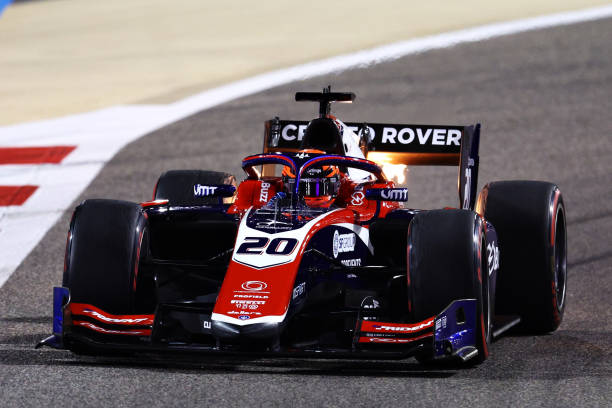 BAHRAIN, BAHRAIN - MARCH 19: Richard Verschoor of Netherlands and Trident (20) drives on track during the Round 1:Sakhir Sprint Race of the Formula 2 Championship at Bahrain International Circuit on March 19, 2022 in Bahrain, Bahrain. (Photo by Clive Rose - Formula 1/Formula Motorsport Limited via Getty Images)

The pole sitter Felipe Drugovich was slow off the line, while Verschoor starting second had a brilliant start and took the lead right off the bat. Verschoor lead going into Turn 1 and held that position as fights broke out instantly further back.

Drugovich fell back to sixth as Daruvala and Ralph Boschung fought for second place. Further back, Jake Hughes in his Vans Amersfoort car and Theo Pourchaire in the ART fought for fifth.

As Hughes continued to fight for a position in the points, he tagged Hitech’s Marcus Armstrong on lap 3, who was spun around and taken out of the race. As the safety car was deployed, Verschoor, Boschung, and Daruvala held the top three places.

During the safety car, Drugovich radioed his team to say he saw oil leaking from Pourchaire’s car. After the restart on lap 6 Pourchaire fell down the order and retired from a mechanical issue. Verschoor held the lead as Lawson joined the fight for the podium positions. The top five after the restart were Verschoor, Boschung, Daruvala, Lawson, and Drugovich.

For the next couple of laps Lawson and Drugovich fought for fourth place, and Lawson finally got past on lap 14, and Daruvala passed Boschung for second place. Immediately afterward, the virtual safety car was deployed for an incident between Hughes and MP Motorsport’s Clement Novalak which took Hughes out the race. Novalak received a 10 second time penalty for the collision.

After the VSC, Boschung and Daruvala went side by side for a couple of corners in an excruciatingly tight battle. Boschung came out on top and regained second place, but Daruvala took it back a lap later.

On lap 21 Lawson took third place from Boschung going into turn 1, and held it to the end of the race. Verschoor won by over two seconds, giving his Trident team their first Formula 2 win since 2016.

A dominant win wasn’t as easy as it looked for Verschoor, as he told FormulaNerds in the press conference following the race.

It was definitely more challenging than it looked, on the third lap I saw Boschung behind pushing a lot… I wanted to save my tyres but but he was going for it. But then luckily the safety car came out, so after that I immediately cleared him for 1.2-3 seconds, which gave me a lot of confidence to keep that gap and I could save my tyres.”

Verschoor, Daruvala, and Lawson made up the podium, Boschung, Drugovich, Sargeant, Vips, and Iwasa completed the point scorers for the day. After an exciting Sprint Race, Formula 2 returns on Sunday for the Feature Race to complete the first round of the season in Bahrain.