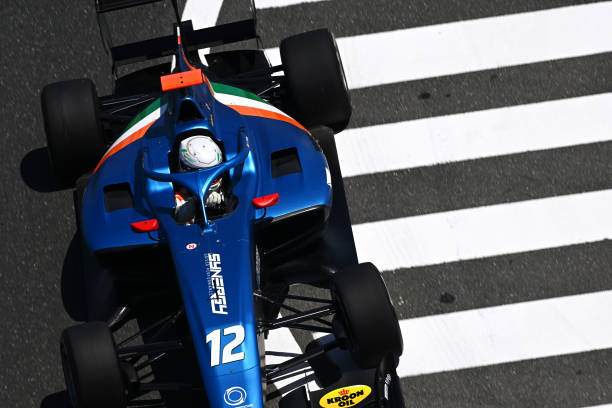 BAHRAIN, BAHRAIN - MARCH 18: Kush Maini of India and MP Motorsport (12) drives on track during practice for Round 1:Sakhir of the Formula 3 Championship at Bahrain International Circuit on March 18, 2022 in Bahrain, Bahrain. (Photo by Clive Mason/Getty Images)

The first be penalised due to an incident with MP Motorsports Alexander Smolyar is Charouz’s Aryton Simmons. The penalty comes as Simmons was found impeding Smolyar near the end of the qualifying session.

After qualifying P29 in todays session Simmons will start tomorrow’s Sprint Race from the back of the grid.

The next driver to face a penalty is MP Motorsport’s rookie Kush Maini who failed to stop at the FIA weigh bridge when signalled to do so.
Maini was due to start tomorrow’s Sprint Race from 10th and Sunday’s Feature Race from 3rd after qualifying P3 with a 1:46.322. This was an amazing time from the rookie being only 0.065 off leader Colapinto and 0.008 behind P2 Stanêk.
However due to the penalty Maini will start from the pit lane for both the Sprint and Feature Race.

This moves MP Motorsport driver Caio Collet up into 12th for tomorrow’s grid. As he qualified in P13 with a 1:46.945.

Full grid and timings are available on the FIA F3 website https://www.fiaformula3.com/Results?raceid=1029