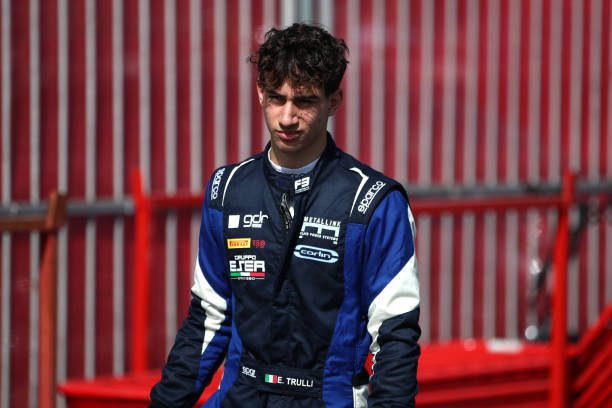 The Italian racer is struggling in his rookie season

After securing a Formula 4 title in 2021, Trulli did not expect the step up to F3 to be as difficult as it has been.

His first three rounds driving for Carlin were tricky for the 17-year-old, with a best finish of 20th in Bahrain. Trulli is only in his second year of single-seater racing but is already aware of where he must improve.

Whilst teammate Zak O’Sullivan sits 15th in the standings with 13 points, Trulli is one of 13 drivers who has not yet scored. Among this group is his other Carlin colleague, Brad Benavides.

The season got off to a poor start for the son of F1 race winner Jarno Trulli. He faced a variety of issues in testing that meant he was granted less driving experience than most, but that did not dampen his aspirations.

“This season has been a bit difficult for me so far,” he said. “Because of the testing when I missed two days, the start was a bit tricky. This year is really different from last year’s cars in terms of power, so I’m still trying to adapt.”

Trulli’s results do not seem to reflect his true abilities, which may be due to his difficulties in qualifying sessions:

“I’m struggling quite a bit to find the pace in qualifying because trying to find the limit with this car isn’t easy. I’m trying to improve as much as I can, but the race pace is good compared to my teammates. But when you start at the back of the grid, it’s a complication.”

What needs to change?

Enzo Trulli is undoubtedly an impressive competitor. After starting karting at 12, he finished first in the F4 UAE Championship and seventh in Euroformula Open.

That was all last year, so you could call his promotion to F3 a bit of a whirlwind. His team, Carlin, signed three rookies for this season in a bold move which currently puts them in eighth in the teams’ standings.

Despite a tough start to the season, Trulli knows what steps need to be taken.

He explained: “My biggest strength right now is race pace, it’s always been good, and I’ve always had nice reports about how I improve the car. Last year, it was my strength so I’m happy I have it still this year but I’m just missing qualifying. I’m always pushing to go faster.

“I’ve just been focused on qualifying to try and find the right fast lap and the right rhythm. It’s just confidence in the car because the grip is different. I need to optimise everything across the race weekend. I need to find the right steps to start towards the front or even in the midfield.”

The combination of working in the simulator and getting help from what he termed “a great team full of hard workers” has helped Trulli improve already. With six rounds of the championship still remaining, we could see the young racer take a leap up the standings.