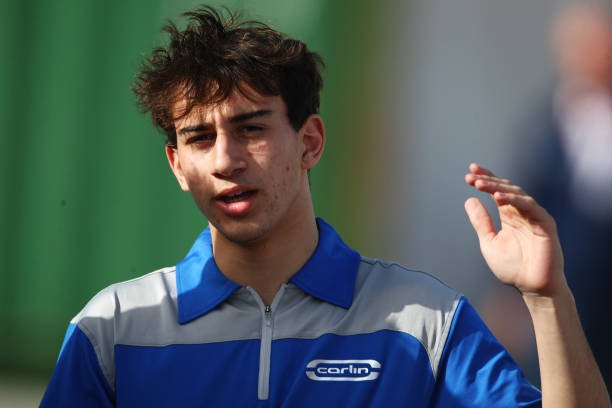 BAHRAIN, BAHRAIN - MARCH 18: Enzo Trulli of Italy and Carlin (28) walks in the Paddock during qualifying for Round 1:Sakhir of the Formula 3 Championship at Bahrain International Circuit on March 18, 2022 in Bahrain, Bahrain. (Photo by Joe Portlock - Formula 1/Formula Motorsport Limited via Getty Images)

16-year-old Enzo Trulli spoke out about how he is finding his rookie year in the series.

In only his second year in single-seater racing, the young driver has earned himself a spot at Carlin.

Racing alongside Zak O’Sullivan and Brad Benavides, he has had a tricky start to the season.

Back at Sakhir which hosted round one, Trulli had a best finish of 20th.

Moving up to F3

Taking after his father, F1 race winner Jarno Trulli, the Italian had a successful start to his career.

Prior to signing a deal with Carlin’s F3 team, Trulli drove to victory in the 2021 season of UAE Formula 4.

His impressive performance saw him take four wins and 13 podiums across 20 races.

He also competed in the Euroformula Open, finishing seventh overall.

Trulli described his move to Carlin as a big step that has involved him doing all he can to adjust to the series.

He said: “I have found F3 quite difficult and challenging so far. I am coming from a very different category, so I am trying to learn as much as I can.

“I don’t have the experience or the mileage with this car, but I am seeing the progression. I am working as hard as I can, trying to step up and get in front of my teammates. It will not be easy, I know that, but I am trying to make the most of it.”

The season got off to a poor start for Trulli, with his car suffering from mechanical issues for the majority of testing.

Despite recovering to complete 79 laps on the final day, he had a much better experience in Jerez last week. Here, he posted an admirable 179 laps.

I think we are doing a great job of testing everything because there is a lot that we have needed to test.

Charles Leclerc “was at 110%” to finish second in Abu Dhabi

Testing is really important. We don’t have a lot of tests in the year, and we don’t get much practice time during the race weekends, so I ran a lot on the two days in Jerez and we got a lot of laps in. I am trying to do as many laps as I can, trying to learn the car.”

After qualifying 28th in the opening round, Trulli is looking to improve his one-lap pace.

He explained: “The pace is good in the race runs. We have been working on qualifying because I am still lacking there a little bit and don’t have a lot of experience.

The grip is very different from what I drove last year and there is more power too, so I am trying to find out the best way to go fast. We did a lot of work in the sun on Wednesday when conditions were dry, but we still have more work to do in Barcelona.

Tuesday was great with the rain as I had not driven this car in the rain before that. Overall, I made a lot of progress and I see a lot of potential.”