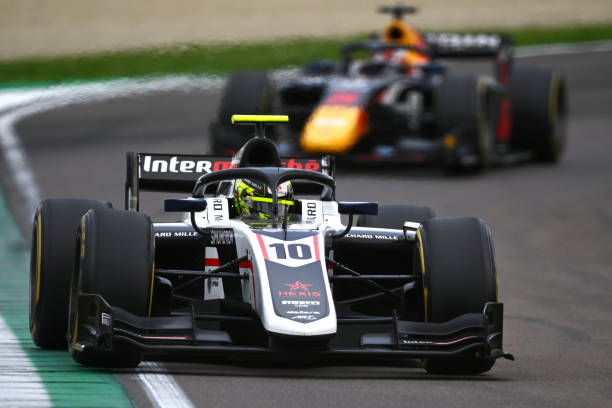 IMOLA, ITALY - APRIL 23: Theo Pourchaire of France and ART Grand Prix (10) drives on track during the Round 3:Imola Sprint race of the Formula 2 Championship at Autodromo Enzo e Dino Ferrari on April 23, 2022 in Imola, Italy. (Photo by Clive Mason/Getty Images)

The drama started before the drivers made it to the grid with Campo’s Olli Caldwell being investigated for dangerous driving in the pit lane.

A slow start for Vips leaves the gap for Campos’s Ralph Boschung to charge through. Nissany however quickly takes his place moving into the lead from sixth place.

The safety car is soon brought out as PREMA’s Dennis Haugher and Virtuosi’s Jack Doohan collide at the start. As a result, Haugher makes contact with the wall as well as Doohan sustaining wing damage. Both retiring respectively.

Many front runners take the opportunity on Lap 8 to come into the pits. With Nissany coming into the pits Daruvala takes the lead.

Lap 21 sees the virtual safety car brought out and the pit entrance closed as Nissany hits the wall forcing him to retire from the race.

As racing resumes Lawson takes the gamble coming into the pits on Lap 26. Race leader Daruvala pitting a lap later giving the lead to Armstrong.

Armstrong’s lead however is short-lived as he comes into the pits a lap later however drops down the order due to a slow stop.

In this time Cordeel picks up another track limit penalty, totalling at 15 seconds and a drive through penalty.

Moving into Lap 30 a battle for P5 is starting between Sargeant and Boschung, Sargeant claiming the place on Lap 31. Sargeants gain soon comes to an end as he drops down into 9th.

Lawsons luck ran out on Lap 34 as he finds the wall bringing out another safety car. Using the safety car conditions Drugovich and Sato come into the pits for their mandatory stops.

Theo Pourchaire leads behind the safety car for the final lap, taking the chequered flag.

The Top 10 crossed the line as follows

The full results can be found on the Formula 2 website.

F2 returns in Barcelona between 20th-22nd May.