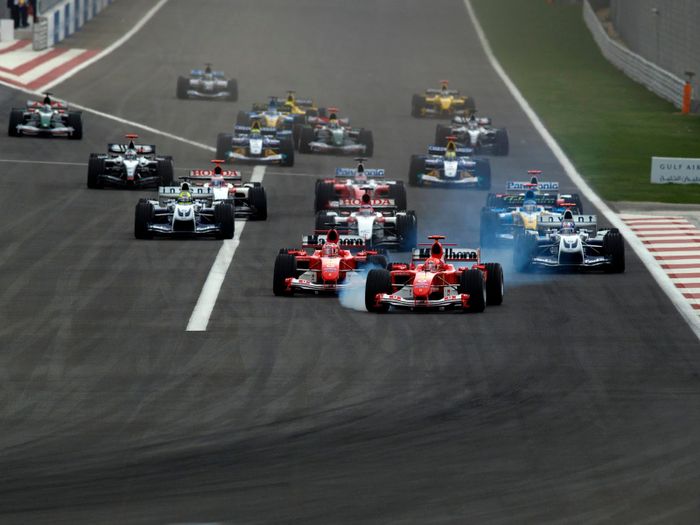 In this edition of our Iconic Cars series, we’ll take a look at the early 2000s. Arguably, 2000 to 2005 had the best sounding and looking F1 cars. Distinctive sounding engines meant fans knew what car was coming before it was even seen. In 2006, V8s replaced V10s. These were not as evocative. The cars were works of art. If a team turned up to race today with one of their early 2000s cars, it would look as modern and futuristic as 20 years ago.

It was a time when many different engine manufacturers were on the grid.  Ferrari, Mercedes, Renault, Toyota, BMW, Cosworth and Honda all fought for sporting and political supremacy. Engine supply deals were rare, with the manufacturers either owning a team outright or acting as an engine partner to an existing team.  This led to high stakes political battles between the teams and the FIA.  The infamous Indianapolis Grand Prix of 2005 was the biggest standoff during the manufacturer era. A breakaway championship was even discussed, though this never really materialised.

The first half of the decade belonged to Michael Schumacher and Ferrari. Ruling F1 with an iron fist, they steamrolled all that lay before them,  though this had consequences. Ferrari was eventually dethroned by Renault in 2005, with the Enstone team successfully defending their titles in 2006. McLaren began to rise after their disappointing start to the 2000s, but title success would not come for the Woking marque until later in the decade.

Ferrari was an unstoppable force from the early 2000s, having wrestled the titles away from McLaren. The driving prowess of Michael Schumacher combined with Team Principal Jean Todt and Chief Designer Rory Bryne made Ferrari unbeatable on and off the track.

The F2002 is one of the most successful cars in F1 history. Winning 14 out of 17 races in 2002, Schumacher wrapped up the title with six races left to go.  Schumacher matched Fangio on five titles in this car. Such was the success of the F2002, it raced for the first four races of the next season, taking a win at Imola.

The 2002 Austrian Grand Prix is the overriding memory of that year. Team Principal Jean Todt in the closing stages of the race ordered Schumacher’s teammate Rubens Barrichello to let Schumacher past for the win.  What followed was farcical. Barrichello slowed to let Schumacher win at the chequered flag at the last possible moment. The crowd booed, and Ferrari was fined. Ferrari’s team order call was not the reason for the fine, rather it was Barrichello being made to stand on the winner’s spot on the podium, and receive the winner’s trophy.

Such was Ferrari’s dominance and distance over the competition in the early 2000s, the team produced an even faster, more devastating car than in 2002. Built by the same dream team, this was the car that gave Schumacher his seventh world title.

The F2004  won 15 out of 18 races in 2004, Schumacher winning 12 out of the first 13 races. It could have been the perfect 13, but rare bad luck struck in Monaco. Schumacher had worked his way to the front through strategy when Juan Pablo Montoya’s Williams crashed into the Ferrari in the tunnel behind the Safety car.   The German legend was livid, throwing his helmet in the garage in disgust.  Jarno Trulli would take victory, one of only three drivers to beat Schumacher that year.

Kimi Raikkonen in a much-improved mid-season replacement car for McLaren took victory at Spa. While Schumacher was crowned champion, the young Finn was likely happy he stopped the German from having it all his own way. Juan Pablo Montoya won the final race of the season for Williams, signing off his time at Grove with a win.

Like the F2002, the car was phenomenally quick, with bulletproof reliability. Forever remembered as one of the greatest cars of all time, the F2004 still holds the lap records at Monza and Shanghai. After 18 years, that is quite a legacy for a truly iconic car.

New sporting regulations came into effect for 2005, limiting the cars to starting and finishing the race on the same set of tyres. Designed to reign in Ferrari and Bridgestone,  it had the desired effect, with Ferrari suffering poor tyre wear as well as reliability.

Fernando Alonso and Renault took over Schumacher’s mantle. battling with McLaren and Kimi Raikkonen. The R25 was quick from the outset, finishing in the top two in every pre-season test.  Alonso was in imperious form during the start of the season, the Spaniard and teammate Giancarlo Fisichella winning the first four races.

Although overtaken by McLaren by the end of the year, the reliability and consistency of Fernando Alonso was more than enough to win the title for Spaniard with two races left.

The car is iconic thanks to its amazing V10 soundtrack and striking blue and yellow livery. One of the best looking cars ever made, it featured in a demo run by Fernando Alonso at Abu Dhabi in 2020. Crammed with paddock regulars and media, everyone wanted to see and hear this amazing car. Lewis Hamilton stopped an interview as he heard it go past stating “That’s the best F1 sound, why did they get rid of it?”. Times change, but V10s don’t.  Long may they sound as great as they did then.

The other most evocative and iconic car from the early 2000s was the McLaren MP4-20. Winning 10 out of 18 races, including 4 out of the remaining 9, the MP4-20 was lightning quick when in the hands of Kimi Raikkonen. That the car won more races than champions Renault spells out the missed opportunity for McLaren that year.

Reliability was McLaren’s Achilles heel. 1999 onwards saw a sharp increase in breakdowns. A win at the fourth race at Imola was lost due to a broken driveshaft. An engine failure at the Nurburgring cost them another, with the same happening again at Hockenheim.

Engine failures were also prone in Free Practice. Under 2005 regulations, engines had to complete two full races. These failures resulted in a ten-place grid drop. Raikkonen performed outstanding comeback drives but was hampered before the race had started when suffering these failures.

Mercedes, as we will see in the next edition, eventually sorted its reliability. It would go on to become the most reliable and powerful engine on the grid.