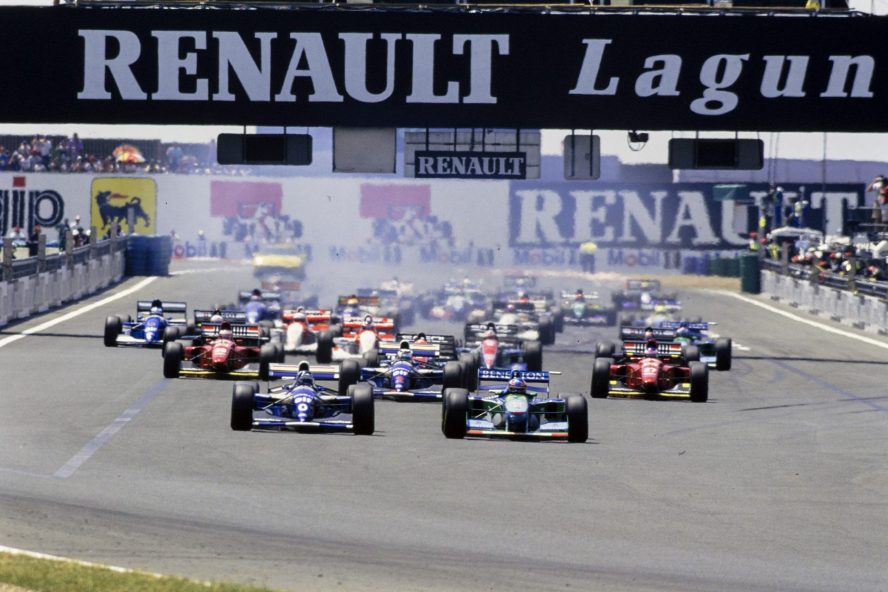 Certain F1 cars stand the test of time to become iconic. Whether the livery,  drivers, technology, or incidents, a select few F1 cars transcend into greatness. This series will look at some of the greatest cars of all time from the 1990s onwards.

Beginning with the 1990s, this was a time of change for F1. The fire-breathing monster turbo engines were outlawed in 1989, and technology was rapidly progressing. The start of the decade was in the midst of the Senna and Prost era. No other drivers could match their ferocious skill and speed, and the championships belonged to the two men from 1988 to 1991.

The dominance of Williams in the early to mid-90s was then replaced by epic battles between McLaren and Ferrari towards the end of the decade. These battles saw a rivalry between the two teams that saw bad blood between Woking and Maranello for years afterwards.

This list is by no means exhaustive, but these are the most iconic cars that raced in F1 during the 1990s.

This is an example of a car that did not win the title but became iconic nonetheless. This car is remembered for its amazing soundtrack – the four-cylinder V12 engine. It is one of the most evocative sounds in all of F1 history. While F1 has needed to move with the times to combat climate change and be relevant in today’s world, this was the last of truly great V12s. The few cars that have survived feature at Monza or Imola on test days.

The F1 90 was driven by four-time World Champion Alain Prost. Ferrari was in the midst of a title drought, and following two years of McLaren domination, this car proved the best chance for the Scuderia to win a championship for the first time since 1979. Prost had left McLaren for Ferrari at the end of 1989. The championship went down to the last race of the season. By this point, any relationship between Prost and Senna had turned sour long ago.

At the first corner of the first lap, Senna spotted a gap and went to overtake his arch-rival. However, Prost closed the door as quickly as it opened, leading to both cars colliding. The championship contenders disappeared into a cloud of tyre smoke and gravel, beached. The collision gave Senna the title, as the Brazilian was nine points ahead of Prost. Senna would later admit to deliberately crashing into Prost, having not moved on from being disqualified the previous year after another collision.

A poor send-off for an iconic car, the F1 90 proved to be the last race-winning car for the Scuderia until 1994. That too was powered by a V12 engine, Gehard Berger taking the spoils at the old configuration at Hockenheim.

Known as “Red Five”, this was the car that dominated the 1992 championship. Taking victory in 10 out of 16 races, Nigel Mansell romped to the title, winning nine Grand Prix that season.

What made this car so iconic was how advanced it was. Even thirty years later, this is still one of the most technologically advanced F1 cars ever constructed. It featured a revolutionary feature called Electronic Suspension. As the name suggests, it made the suspension able to be controlled electronically. The car used an onboard system too. It also featured traction control, while anti-lock brakes also featured for a short time.

The car had a searing pace, averaging two seconds a lap faster at certain tracks in the hands of Mansell. Mansell was two seconds faster than second-placed teammate Riccardo Patrese at the British Grand Prix. What was more remarkable was that Patrese was a second clear of third-placed Senna in his McLaren.

What is truly unique about this car, is that 1992 was the second season for the FW15. Originally raced in 1991, the car showed promise with its advanced technology but suffered poor reliability. The semi-automatic transmission made the car quick and prone to breaking down. This was refined for 1992.

This car is also remembered for a memorable incident. At Silverstone in 1991, Senna’s McLaren retired from the race having run out of fuel. Mansell slowed down and picked up the Brazilian, in scenes that have become iconic. Chassis FW14-5, the very car at the centre of this historic moment, was recently auctioned off.  It will set someone back a fair bit of cash.

1994 was a bad year for F1. The deaths of Ayrton Senna and Roland Ratzenberger left a cloud over the grid, which the season never recovered from. The championship would go down to the final race in Adelaide.  The contenders for that year were Senna’s Williams teammate Damon Hill and Benetton’s Michael Schumacher.

The B194 was the car that Schumacher would win the first of his seven titles. Schumacher won the first four races in a car that was quick from the first test. However, it was also rumoured to be filled with illegal technology. Rival teams were convinced that both launch control and traction control were features of the B194. This was never proved, but rumours to this day remain. The FIA found elements of launch and traction control on the car, but could not prove they were used.

However, the team was also found guilty of breaking the rules on numerous occasions with the car. Schumacher won the Belgian Grand Prix but was disqualified after scrutineering found a heavily worn plank.  Benetton argued this was the result of a spin on lap 19. The stewards dismissed this argument.

At the German Grand Prix, Schumacher’s teammate Jos Verstappen’s car caught fire in the pits in a terrifying incident. Benetton was summoned to the FIA to answer an allegation that they deliberately removed a fuel filter from the rig. Benetton released a statement stating there was a fault with the rig.

The B194 was undoubtedly quick, but its legacy as Michael Schumacher’s first title-winning car will forever be marred by the question of cheating.

Williams came into 1996 having lost both titles the previous year. The FW18 built on the strengths of the 1994 and 1995 cars, and Damon Hill was now going for his third shot at the championship.  The FW17 was a very quick car, but a combination of unreliability and driver error led to both titles slipping away to Benetton.

Schumacher had departed Benetton for Ferrari at the end of 1995, and both teams were not on the same level as Williams.  Williams was now in a prime position to regain both titles. The car was awesomely quick, and the team dominated the championship. The battle for the driver’s title was between Hill and Jacques Villeneuve.

Reliability was never an issue for the FW18, with very few failures. Hill lost a sure Monaco win due to a rare Renault engine failure. Hill’s other retirements were caused by driver error, notably hitting the wall in Barcelona, and spinning out in Monza from the lead.

The car will forever be remembered as the car to finally break Hill’s duck. Winning the final race in Suzuka, the  iconic blue Williams crossed the line to the legendary Murray Walker saying : “I’ve got to stop because I’ve got a lump in my throat”.

F1 bought in new regulations for 1998, which were a massive change for F1. McLaren nailed the regulations, thanks to the arrival of Adrian Newey from Williams. Narrower cars and grooved tyres caused a change of the guard. This car is also remembered for its Champion driver: Mika Hakkinen.

The car was the one to beat from the pre-season testing. This proved to be the case when the McLaren’s finished one and two in Melbourne, lapping the entire field.

At the next race in Brazil Ferrari protested a secret brake pedal found in the McLaren. Operating the rear brakes independently, it allowed more traction out of the corners. Williams and Jordan also had similar concepts but were not developed. Team Principal Ron Dennis said that he did not believe that the ban of the system ahead of qualifying would not affect the performance of the MP4/13. McLaren scored another one-two finish, with Schumacher a full minute behind in third.

Ferrari caught up as the season progressed, drawing level on points with Hakkinen with a few races left.  The title once again went down to the last race in Suzuka, where Hakkinen triumphed, winning the first of his two titles.

While the term “silver arrow” is normally associated with Mercedes, in the late 1990s and early 2000s, it was to describe the silver liveried McLarens. This was the car behind that iconic association.