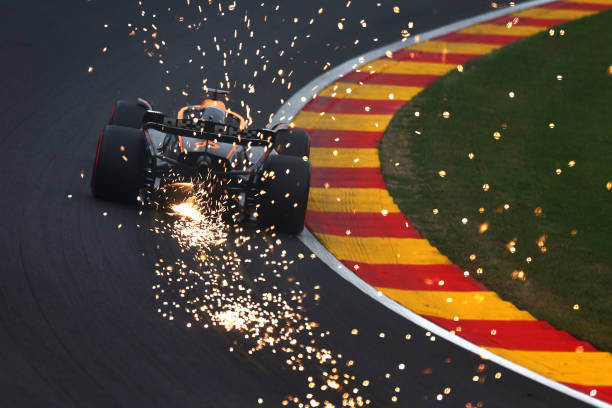 Daniel Ricciardo’s Belgian Grand Prix was compromised. The McLaren driver had to discard the lower-drag rear wing that McLaren had developed.

Ricciardo did not go into Belgium in the best of ways. On Wednesday, McLaren would announce the termination of the Australian’s contract at the end of the year. Ricciardo had a contract with McLaren until 2023, but with recent performances, the Woking team decided to cut the partnership short.

Ricciardo went into qualifying with no pressure after he knew that he would not be continuing with McLaren next year. However, the Australian was beaten by teammate Lando Norris in qualifying once again.

Despite receiving a tow from Norris, Ricciardo would exit in Q2. The Australian was two tenths behind the Briton, who made it into Q3. Ricciardo hinted that he struggled with an issue out of his control, forcing him out of qualifying.

What was the problem?

Ricciardo did not have the intended rear wing going into qualifying and the race. McLaren have not specified the issue, but what matters is that the Australian had a tough race because of it.

The issue forced Ricciardo to switch to an older wing with higher drag and downforce. This hurt the 33-year-old on the straights – a major part of sectors one and three.

The first sign of the poor straight-line speed came when Alex Albon glided past the Australian. After that, he gradually slipped further away from the points, ending up in 15th.

After the race, Ricciardo revealed that he had to put on a different rear wing, resulting in being slow on the straights:

“We simply just weren’t quick on the straights. I had to put a different wing on because our race-spec one had a bit of an issue. I knew it would hurt us on the straights with more drag.”

Ricciardo further went on to say how much he struggled to pass other cars: “I saw ahead that I wasn’t the only one struggling to pass on the straights but I had speed to use in the second sector. But the first and third sector, even with DRS, I couldn’t pass.

“It was a pretty long and frustrating race, I felt like we were waiting for a mistake. I said on the radio ‘I’m trying but unless they make a mistake in front, it’s literally impossible to pass’.”

Unfortunately for Ricciardo, the extended stint did not work. The 33-year-old would lose out on places to Lance Stroll, Norris and Zhou Guanyu to end the race in 15th. The McLaren driver admitted that he had no optimism after Albon blasted past him:

“If we had a little bit of distance on him, the race probably could have been very different. But I think when his tyres were fresh that Williams had good speed to use.

“He struggled more with degradation but early in the race he had pace. That first and third sector, if I didn’t have a tow from somebody in front, I was a bit of a sitting duck.”