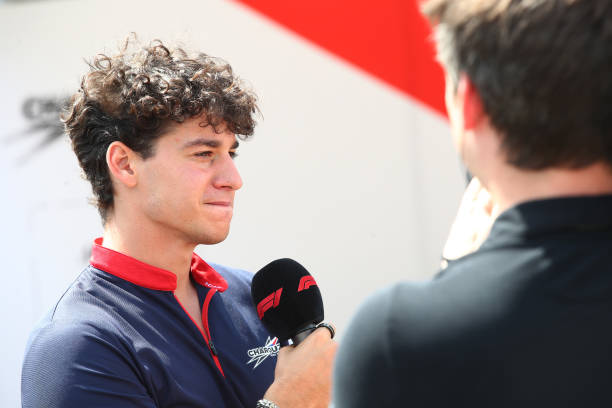 BUDAPEST, HUNGARY - JULY 28: Cem Bolukbasi of Turkey and Charouz Racing System (23) talks to the media in the Paddock during previews ahead of Round 10:Budapest of the Formula 2 Championship at Hungaroring on July 28, 2022 in Budapest, Hungary. (Photo by Joe Portlock - Formula 1/Formula Motorsport Limited via Getty Images)

Tension rises between Bolukbasi and Charouz over termination

Will there be another driver's contract going to court this season?

Cem Bolukbasi has put out his own statement following Charouz’s announcement of his termination.

At this point, driver contract issues in motorsport are hardly a surprising issue. Bolukbasi clarified in his statement that the issue was due to financial issues and not due to results or any other matter.

It also seems like Charouz’s announcement was a surprise, and not agreed upon by Bolukbasi or his team. He references his termination as “supposed” and not a fact. He also mentions his legal team, suggesting they may take other steps to resolve this issue.

Yesterday Charouz Racing put out a statement saying that Tatiana Calderon would be replacing Bolukbasi for the remainder of the 2022 season. At the time all they said about why this change was being made was that Bolukbasi’s contract was “terminated by mutual consent.”

Then, Charouz made an even more cryptic comment to F1 Feeder Series. The team stated that “Charouz Racing System wishes to clarify that was the team’s decision to withdraw from the contract with Turkish driver Cem Bölükbasi, based on a major breach of the agreement between the parties from the driver’s side.”

Not long after, Bolukbasi and his team released a statement on Twitter, attempting to clarify the issue.

“Despite our well-intentioned and constructive attitude, we unfortunately have not been able to reach a mutual consensus on the financial contract terms requested by Charouz management team for the last four races. Therefore, I will not be competing in Belgium Spa this weekend. We are exploring our legal options regarding this supposed termination and other breaches of the contract which we believe to be unfair.

“For me, Formula 2 is of course not over here and we are in discussions with teams for the future. I hope we will be able to share some good news in a short time.

“I would like to put on record that the sporting side of the team has been excellent and the supposed termination is not down to a sporting matter. We have worked very well as a team and made great progress so I would like to thank the mechanics, engineers and all sporting personnel for all their support so far and wish them every success for the future.

“I am aware of my responsibility towards my sponsors and young motor sports volunteers who support us in all circumstances. That’s why I will always continue to do my best.”