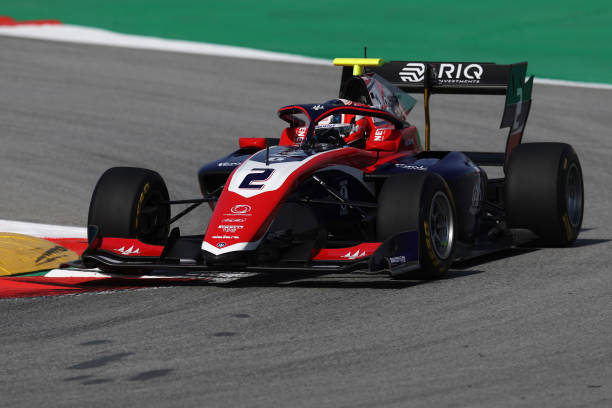 BARCELONA, SPAIN - MAY 20: Roman Stanek of Czech Republic and Trident (2) drives on track during practice ahead of Round 3:Barcelona of the Formula 3 Championship at Circuit de Barcelona-Catalunya on May 20, 2022 in Barcelona, Spain. (Photo by Alex Pantling - Formula 1/Formula Motorsport Limited via Getty Images)

Roman Stanek takes pole position in Barcelona with a 1:35.516 in his best ever qualifying. Victor Martins followed closely in second with Alexander Smolyar behind in third.

As the light went green at the end of the pit lane cars filed out onto the track. Championship leader Victor Martins had a delayed exit onto the track after his car had to be restarted.

Hitech’s Isack Hadjar set the first benchmark time, setting a 1:34.181. This was soon displaced by MP Motorsport’s Caio Collet who took the top spot with a 1:34.026. VAR’s Franco Colapinto followed with a 1:34.042, the pair being separated by only 0.016 seconds. Current championship leader Victor Martins came in P3 setting a 1:34.108.

After a flurry of action, the cars began to make their way into the pit lane. With 20 minutes to go the Top 15 drivers were separated by a second.

Trident’s Zane Maloney is due to be investigated after the session. Maloney missed the weighbridge upon returning to the pit lane a mistake that saw MP Motorsports Kush Maini disqualified from qualifying in Bahrain.

Heading out on their second runs Hadjar once again sets the benchmark with a 1:33.909. This however was snatched by PREMA’s Oliver Bearman who set a 1:33.747. Bearman was quickly displaced by MP Motorsports Alexander Smolyar with a 1:33.613.

Trying to break his qualifying curse PREMA’s Arthur Leclerc was the next to cross the line with a 1:33.731. Not fast enough for provisional pole Leclerc pushes his way to P3 displacing teammate Bearman.

With 10 minutes remaining the grid filed into the pits once again the Top 19 being separated by a second. Trident’s Roman Stanek tried to take advantage of the empty track however he only managed to push himself into P10 with a 1:34.001.

The grid returned to the track with just over six minutes remaining. Traffic started to accumulate as the thirty cars made their way out.

Hadjar managed to improve on his time claiming P3 from Leclerc with a 1:33.726.

As the chequered flag was waved the Top Five remained as it was however Stanek remained on a lap. Crossing the line Stanek took pole position with a 1:33.516 pushing Martins into P2 and Smolyar to P3.

As a result, this marks Stanek’s best qualifying performance in Formula 3 so far.

The Top 12 will line up as follows for Sunday’s Feature Race:

The grid will be reversed for Saturday’s Sprint Race.