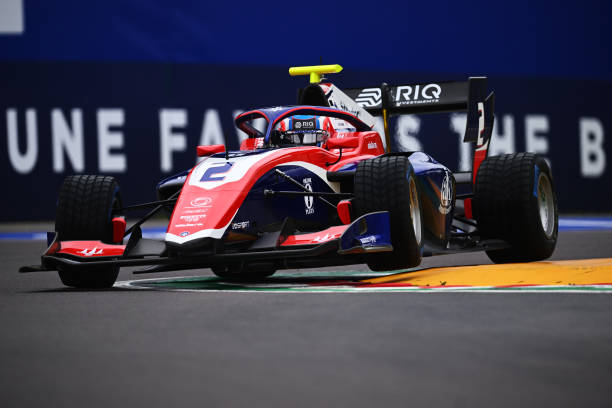 IMOLA, ITALY - APRIL 22: Roman Stanek of Czech Republic and Trident (2) drives on track during qualifying ahead of Round 2:Imola of the Formula 3 Championship at Autodromo Enzo e Dino Ferrari on April 22, 2022 in Imola, Italy. (Photo by Clive Mason/Getty Images)

As the lights went out Stanek took the lead but was quickly overtaken by pole sitter and teammate Zane Maloney. However by the end of the lap MP Motorsports Caio Collet takes the lead.

Lap 2 brought out the safety car as Carlin’s Brad Benavides collided with VAR’s Reece Ushijima. As a result of the collision, Benavides received a 10-second penalty. Charouz’s Francesco Pizzi also spun putting himself out of the race.

Taking advantage of the safety car front runners Collet and Colapinto come into the pits making the change to slicks from the wet tyres. This however saw them both fall through the field with Maloney taking the lead.

Colapinto and Jenzer Motorsports Ido Cohen come under investigation for being out of position at the start of the Safety Car Line 1. Consequently, Colapinto sees himself with a 10 second stop and go penalty.

Upon the safety car restart Maloney is able to consolidate his lead. Behind, Campos’s Josep Maria Marti takes the opportunity to pass Bearman and Stanek to take P2.

Lap 6 see’s Marti take the lead however this is soon reclaimed by Maloney on Lap 7. Benevides, after his earlier collision see’s himself in the wall bringing out the Safety Car. Using the Safety car conditions, Marti and Yeany pit making the change for slicks.

Maloney leads behind the safety car however spins on the restart placing himself in the grass. Bearman taking advantage of the mistake takes the lead with Stanek behind him.

Once again the safety car is brought out to recover Maloney’s car.

As we get underway again the top 3 remains the same, Bearman leading with Stanek and Crawford following.

Further down the field PREMA’s Arthur Leclerc charged through the field overtaking Hitech’s Kaylen Frederick on Lap 17. Leclerc comfortably putting himself into P8 making up 12 positions after starting 21st.

As we approach the final lap Bearman is struggling, falling further behind. ART’s Gregoire Saucy collides with Bearman in the fight for P3 leaving Saucy stopped on track. After investigation Bearman received a post race penalty of 20 seconds dropping him to P17.

By Jay Winter3 days ago

With the collision between Bearman and Saucy behind him, Stanek crosses the line taking his first win in FIA Formula 3.

The Top 10 lined up as follows:

The dramatic race leaves both Leclerc and Martins tied at the top of the driver’s championship each with 36 points. However, in the team standings, PREMA has a dominant lead with 85 points.

All results can be found on the Formula 3 website.

FIA F3 returns in Barcelona between 20th-22nd May.