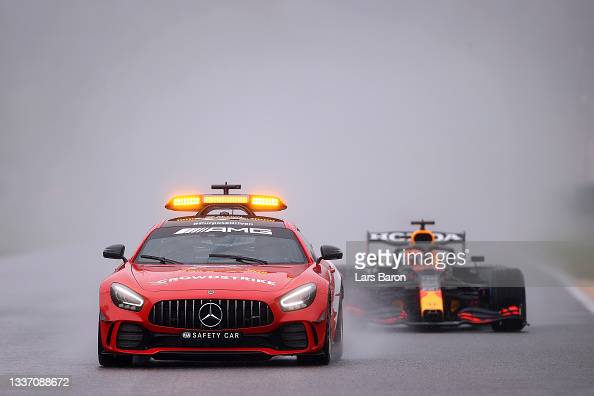 SPA, BELGIUM - AUGUST 29: The FIA Safety Car leads Max Verstappen of the Netherlands driving the (33) Red Bull Racing RB16B Honda and the rest of the field at the restart during the F1 Grand Prix of Belgium at Circuit de Spa-Francorchamps on August 29, 2021 in Spa, Belgium. (Photo by Lars Baron/Getty Images)

A race we will remember for all the wrong reasons

Following torrential rain, and a trip into the barriers for Sergio Perez on his way to the grid, a delayed formation lap got underway behind the safety car. Drivers were complaining of not being able to see through the spray and the conditions were so bad that the start was aborted after two trips around the circuit.

What ensued for the soaked fans at Spa and viewers at home was a three hour wait as FIA Race Director Michael Masi looked for a gap in the weather. Commentators, teams and drivers were all spectacle as to if the race would even go ahead – many thinking the Belgium Grand Prix would be abandoned without classification.

However, after an agonisingly long wait, the cars went back out on track, once again behind the safety car. It was a decision made in quite hopeless circumstances as the rain still relentlessly poured and the track conditions worsened. After two further laps, the red flag was brought out once again and the race was cancelled. Controversially, the field had now completed enough laps for the grid to be eligible for classification. Therefore it was deemed that Verstappen had won, with George Russell second and Lewis Hamilton third. All drivers were disappointed not to have put on a race for the fans but, Russell was ecstatic to have secured his first F1 podium and more points for Williams. As less than 75% of the race had been completed, drivers were awarded half points.

The result means that Hamilton holds his lead in the championship but now only by three points.