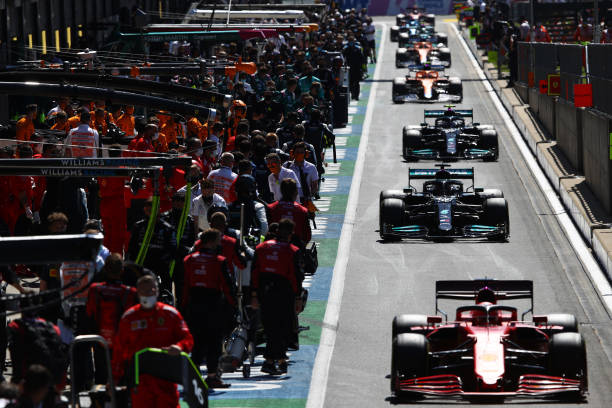 NORTHAMPTON, ENGLAND - JULY 18: A general view of the field stopped in the Pitlane for the red flag delay during the F1 Grand Prix of Great Britain at Silverstone on July 18, 2021 in Northampton, England. (Photo by Mark Thompson/Getty Images)

With Race Day (Sunday) being the most popular day of the race weekend it is often the first to sell out. Silverstone is no exception to this, with all 142,000 tickets selling out in record time.

Friday and Saturday tickets are also becoming increasingly limited. Alongside the pace of ticket sales organisers are confident that all three days are expected to be a complete sell-out.

Managing Director of Silverstone, Stuart Pringle, speaking to the Guardian, commented “We have experienced unprecedented demand for tickets for the 2022 Formula One British Grand Prix.”

As a result of the demand, Silverstone has “increased capacity slightly by adding extra grandstand seats”

Pringle concludes by adding “If sales continue at this pace, we expect to be sold out across all three days”

Silverstone has been on the calendar consistently since 1950. However should all three days sell out as expected, this would be the first time in history.

Last year saw 356,000 tickets sold over the entire weekend with 2022 expected to surpass this.

Already this season we have seen capacities increase due to ticket demands.

Melbourne produced a record-breaking crowd of almost 420,000. This therefore broke the highest ever event attendance at Albert Park.

By Gracie Talia Ross5 hours ago

A similar scene was also seen at the 2021 United States Grand Prix. Labelled the resurgence of F1, the Circuit if the Americas hosted over 400,000 fans over the race weekend.

With the weekend sellout placing the increase down to Netflix’s ‘Drive to Survive’ another American race has been added to the 2022 calendar to keep up with demand. A third American race will also be held in Las Vegas during the 2023 season.

Making the move to America has seen ticket sales soar. Both the Miami Grand Prix and the United States Grand Prix (COTA) are a sell out respectively.

Silverstone will not be the first race of the season to sell out. Many of the races of have sold out in record times. The Dutch grand prix selling out in just over 24 hours, while Singapore sold out in just 6 hours.

With tickets for many races still to be released we could be seeing more record-breaking crowds this season.