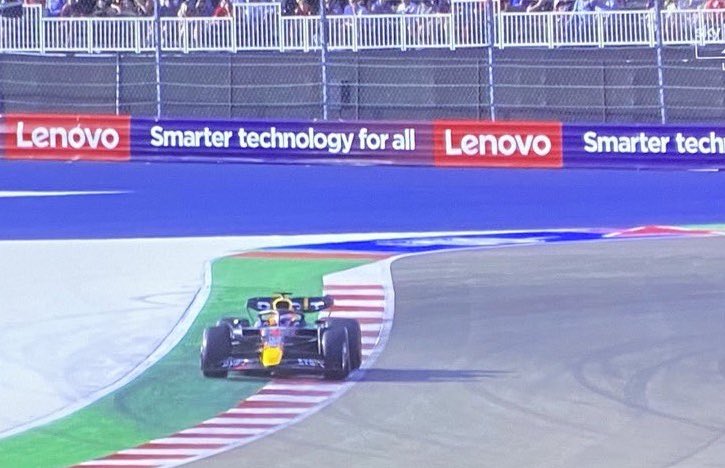 Verstappen in Q1 at the US Grand Prix. (Photo Credit: Sky Sports).

Should Verstappen have been eliminated in Q1 at the US Grand Prix?

Footage has emerged which appears to show that the lap Max Verstappen set in Q1 at the US Grand Prix should have been deleted.

Slowed down frame-by-frame, the video suggests the Dutchman had all four wheels over the white line on the exit of turn 12, a track limits infringement that usually renders a lap invalid.

With Verstappen having only set one lap in the first part of qualifying, many fans have taken to social media to question why he won’t be starting the race from the back row.

The two-time world champion’s apparent infringement also happened at the same corner as Zhou Guanyu’s, though the latter had his time deleted in Q2, causing him to miss out on Q3.

However, with there still being a significant amount of animosity between Lewis Hamilton and Verstappen fans online, it’s always worth taking claims about either with a pinch of salt.

No doubt, the issue of track limits has continually raised its head throughout the season, and remains a grey area that the FIA needs to get on top of. But with closer inspection, the latest track limits debate appears to have been overblown.

Before getting stuck into whether Verstappen’s lap should have stood, it’s worth quickly recapping the rules on track limits.

In the past, these have changed circuit-to-circuit, but in an effort to clarify the rules for fans and drivers, the FIA has made them uniform for the 2022 season. Track limits are now defined by the white line running around the edge of the circuit.

Drivers who put all four wheels over this line will have their time deleted in qualifying, and those that do so repeatedly in-race, risk being hit with a penalty.

So, that should make judging whether the Verstappen lap should’ve counted easy right? Well, not exactly.

The problem with the images being shared on socials is that they’re inconclusive, with some showing the Dutchman’s front left wheel in, and others suggesting it’s out of bounds.

Given that no fewer than five lap times were deleted during qualifying, it’s likely the FIA will have had access to all the footage, examined it, and cleared Verstappen during the session.

Another issue with the case being made against the 25-year-old, is that it involves a direct comparison with Zhou’s lap, with one apparently being disqualified, and the other not.

However, upon closer inspection, the imagery of the Alfa Romeo driver’s lap being shared appears to show the stewards made the right call.

Zhou himself has also taken to Twitter to say the lap was “deleted with the smallest margin,” but he has opted not to publicly contest the FIA’s decision, instead choosing to focus on the Grand Prix ahead.

Without getting bogged down in the rivalry between Verstappen and Hamilton fans, the debate around track limits in Austin has shown that the FIA still has work to do.

As reported by RaceFans, new F1 Race Director Niels Wittich’s move to simplify track limits ahead of the Bahrain Grand Prix, was initially welcomed by many fans. But it wasn’t long until the issue remerged, with the harsh implementation of these rules drawing criticism from several drivers.

Earlier this year, no fewer than 43 track limits violations handed out in Austria, and Sebastian Vettel, Lando Norris, Pierre Gasly and Zhou were ultimately given penalties.

The FIA’s consistency in applying track limits regulations has also drawn criticism. In Hungarian Grand Prix qualifying, for example, Sergio Perez had his first lap time in Q2 deleted for an infringement exiting turn five, but this was later reinstated.

After the incident, Verstappen criticised the sport’s governing body, telling Autosport it was treating drivers “like they are amateurs.”

That said, not all drivers have sought to lay blame, and even the notoriously controversial Juan Pablo Montoya has defended the FIA, saying these decisions are often “a judgement call” that he “doesn’t envy” having to make.

Where there has been constructive criticism on social media, some have called for the introduction of an impartial electronic system akin to VAR in football, to make these kinds of calls. Perhaps given the politics of the sport, this is the best way to resolve the issue once and for all.