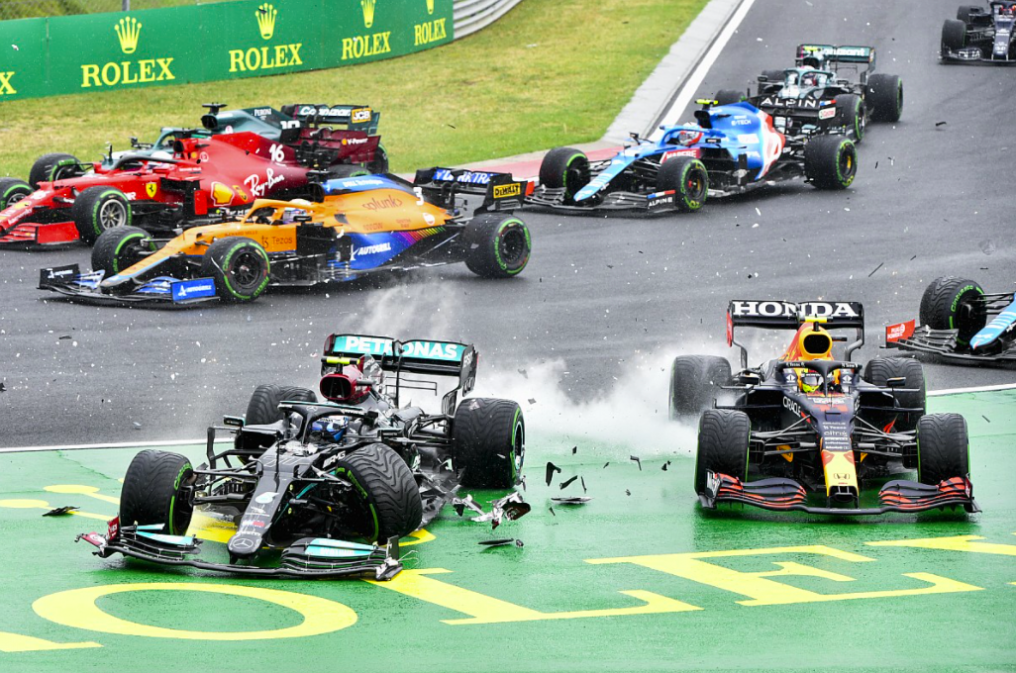 An unexpected 14 drivers pushed every single lap to score points.

The drivers were ready to race. A horror start changed that. The track started super rubbered in. The rain escalated efforts. Despite the 60% chance of rain, the sun surprised to warm up the track. The C3 soft tyres were the fastest. The C4 medium tyres were balanced and the C5 hard tyres looked long-lasting. With 14 turns, six to the left, eight to the right, it was epic!

Heading into turn 1, Lewis led. Valterri Bottas misjudged his braking, locked up, and ended up tagging Lando Norris who collided with Max Verstappen and Sergio Perez. With a chain reaction, Stroll slid into Charles Leclerc ended up going off into the gravel. We lost five drivers including Perez, Stroll, Leclerc, and Bottas within a space of 600m. A yellow flag in sector 1 appeared along with a safety car. The marshalls came out to clear the massive amounts of debris and all of the drivers had tons of damage to their cars. Red flag. Session stopped. What a chaotic start.

Sergio said on the track, “Bottas lost the car. Bottas just made a big mistake. It’s a big shame. It’s a massive blow for us as a team. I don’t know what to say.” Perez suffered a busted engine and couldn’t do any more for Red Bull.

Norris noted on the track, “There’s not much to say. I don’t know why. What has to happen? Why risk doing stupid things? If I get a penalty for not doing anything wrong, others should. We’ll see. It’s not to me at the end of the day.” Being third in the driver championship, Lando didn’t get any points today for himself or Mclaren.

All the drivers went into the pit except for Lewis. Hamilton decided to wait and ended up last to fight his way to the front. Many wondered were Mercedes at fault for not boxing. For the first time, the top five were drivers were Ocon, Vettel, Latifi, Tsunoda, and Sainz leading the race. Kimi Raikkonen got a 10-second penalty for an unsafe release hitting Nikita, in the pit lane forcing him to retire.

It was musical chairs between Ocon, Vettel and Alonso as pit stops were taken. Fernando and Lewis were wheel-to-wheel defending their positions into the corners of turn 1 and turn 2. Hamilton rose from 14th to 5th dominating the fastest laps. Sainz sailed along on fresh tyres. Verstappen continued cruising in 10th but lacked pace because of car damage. Red Bull managed to still score points.

AlphaTauri took charge on the track. Gasly got to secure 7th with Tsunoda in 8th. This left Latifi and Russell right behind. For the first time, the two Williams drivers can finish in the top 10. Meanwhile, Mclaren’s only hope was Daniel Ricciardo who couldn’t quite hold on.

Daring to make moves, Lewis Hamilton kept the pressure on for a clean overtake of Fernando Alonso. Such intense action. It was such close contact between the Mercedes and Ferrari. Hamilton hammered through to pass Sainz. Mercedes fumbled but still got their podium in the end. Aston Martin made their mark. Sebastian Vettel went on to claim his place. What a great result for the team.

What a victory for Esteban. Ocon won his first Grand Prix race in Hungary. Congratulations to the Frenchman! He’s now the 111th winner in F1 history. What a day for the Alpine team. Time to celebrate after a thrilling race!

The final race results are below. No one could have predicted this. What a drama-filled day we had today in Hungary.