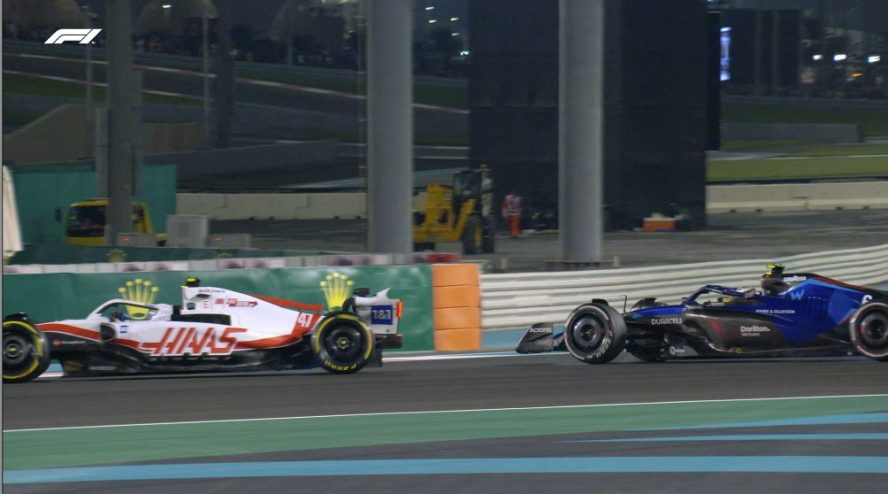 Schumacher on Latifi crash in Abu Dhabi: “I just simply didn’t see him”

Mick Schumacher admits that he “didn’t see” Nicholas Latifi when the two drivers collided during his final race for Haas in Abu Dhabi.

Heading into the Abu Dhabi weekend, Mick Schumacher’s future in Formula One was uncertain. Since silly season began, it was unknown whether Haas would retain Schumacher for the 2023 season once his contract had ended.

Last week, however, the American team finally confirmed Schumacher’s future when they announced Nico Hulkenberg as their second driver for next season. This meant that Schumacher would be left without a seat on the grid next year.

Therefore Abu Dhabi was Schumacher’s final race, not just of the season, but his final race with Haas. Unfortunately for the German, he didn’t have the best performance on the track.

During the Abu Dhabi Grand Prix, Schumacher received a five-second time penalty. This saw him finish the race in 16th. He received the penalty for his crash with Williams’ Nicholas Latifi, who is also without a drive for 2023.

When the two drivers collided, they spun in synchronisation and Latifi collided with the wall. They both got up and running again, but Latifi ultimately retired from the race after coming into the pits with an electrical issue.

Motorsport.com spoke to Schumacher about the collision with Latifi. Schumacher said:

“I just simply didn’t see him.”

The German driver justified his response by saying: “In general with these cars, you don’t really have a big overview of what is happening in your surroundings.

“I mean, the tyres are super high, the steering wheel is in your face. So he outbraked himself a bit, went wide, and then came back onto the track. And I didn’t expect that, to be fair.”

Schumacher hasn’t had the cleanest season with three DNFs, but he did manage to score his first F1 points at Silverstone. However, he wasn’t happy with how his final race with Haas had gone.

He said: “So frustrating at the end, I still managed to kind of get some good laps in, but by the end, the tyres were just gone. So yeah, a frustrating one, not the best, but we’ll look ahead.”

Schumacher continued by saying that “on one lap, things always look a bit different because you can as a driver really get everything out of it in the race.” But he did admit that “it’s a bit more difficult [in the race].”

The 23-year-old explained saying, “you have different components, winds change, tyres the moment you lock up, the tools, the systems, everything has to be perfect to get the best out of the race.

“And simply today [in Abu Dhabi] that wasn’t the case.”

Schumacher spoke to Motorsport.com about it being his final race with the team. Schumacher admitted that Abu Dhabi didn’t really feel any different despite it being his last time out in the Haas car. He said:

“It didn’t feel for one that it’s the last race of the season. And two, it didn’t feel like my last race. So again, my mind is pretty much set on coming back in ’24.”

Nothing is confirmed regarding Schumacher’s future as of yet. But the German has been linked to a reserve driver role for Mercedes for 2023.

When speaking about his future, Schumacher said he feels “confident” that he’ll “be able to put something in line for [himself] where he feels confident”. He added that “a lot of people in the paddock are happy about how [he’s] developed.” Schumacher feels that he will be able to “talk to a great deal of teams.”

Both Schumacher and Latifi will be absent from the grid next year. The Abu Dhabi Grand Prix didn’t quite go how they wanted it to but the two will be missed in 2023.