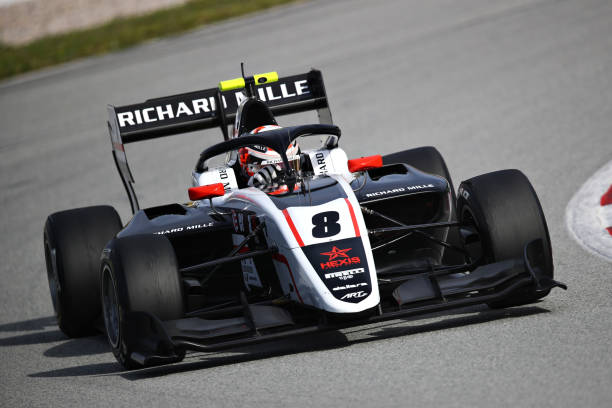 After Formula 2’s three full test days at the track earlier in the week, it was time for the Formula 3 drivers.

Saucy’s lap time, a 1:32.247, was set during the morning session. He came out on top of Vans Amersfoort’s Franco Colapinto by 0.155s. His ART teammate Victor Martins was right behind them with the third fastest time.

A few familiar faces made their return to Formula 3 for testing. Matteo Nannini ran with ART, filling in for the injured Juan Manuel Correa. David Schumacher also made his 2022 debut with Charouz, filling in for Aryton Simmons.

Trident’s Zane Maloney was the first driver to set a representative lap with a time of 1:33.962. His teammate, Roman Stanek, quickly became the first to break the 1m 33s mark, something only ten drivers would do throughout the whole day.

The first of two red flags came out for Isack Hadjar of Hitech. It was after this incident that Saucy set the top time, both for the session and of the day. Not long after the red flag came out again, this time for Nannini, who had stopped on the track.

Behind Saucy, Colapinto set the second fastest time: a 1:32.402. The Argentine driver was the one to do the most running in the session with 49 total laps completed.

Martins was less than a tenth behind Colapinto, and Maloney and Stanek completed the top five.

During the afternoon sessions, the fastest times were in the 1m 33s. Caio Collet was the first to set a representative lap, putting the benchmark at 1:34.465.

It took a while for anyone to top his time, and Collet was the first driver to get into the 1m 33s area. He would end the session in second on the timing sheets, behind his teammate Alex Smolyar.

Stanek took third in the afternoon session, ahead of Kush Maini and Saucy. Everyone behind them was in the 1m 34s for the final session of the day.

Overall, the top ten lap times of the day were set during the morning session, by Saucy, Colapinto, Martins, Maloney, Stanek, Maini, William Alatalo, David Vidales, Smolyar, and Nannini. These top ten were all the drivers who set lap times within 1m 32s, with Nannini’s fastest lap being a 1:32.896.

The full results of the day can be found here.

Formula 3 has one more day of testing at Barcelona tomorrow, beginning at 9am local time.