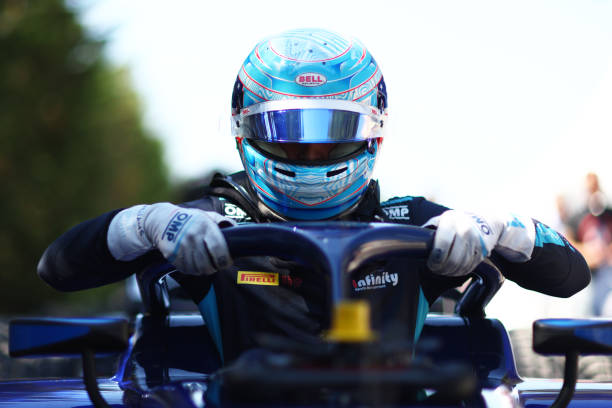 LE CASTELLET, FRANCE - JULY 22: Logan Sargeant of United States and Carlin (6) prepares to drive during practice ahead of Round 9:Le Castellet of the Formula 2 Championship at Circuit Paul Ricard on July 22, 2022 in Le Castellet, France. (Photo by Dan Istitene - Formula 1/Formula Motorsport Limited via Getty Images)

Williams Academy driver Logan Sargeant was the man to beat in today’s qualifying session, taking pole position with a 1:43.871.

Pourchaire temporarily took the top spot at his home race, but he was quickly displaced by Logan Sargeant with a 1:44.599. Despite Doohan setting two purple sectors, he couldn’t quite beat the Carlin driver slotting himself into P2. Iwasa quickly pushed him down, however, into P3 as he set a 1:44.721.

Doohan’s lap time is, however, deleted after a track limit violation at turn 12, pushing him down to P5.

With 15 minutes remaining on the clock, the drivers started to peel into the pits. Trident’s Richard Verschoor tried to take advantage of the track time; however, he was unable to improve from P4.

Clement Novalak led the field out of the break with ten minutes remaining.

Back in the pitlane, Charouz’s Enzo Fittipaldi had to retire from the session, unable to leave the pitlane.

Dennis Hauger brings out the red flags after stopping his PREMA on track once again after being unable to finish the practice session.

Racing resumes with just over seven minutes remaining on the clock, Drugovich leading the field out of the pitlane.

As the rest of the field battled for track position, Drugovich took advantage of the clear track for another lap; this, however, only improved him into P3. Iwasa failed to cross the line in time to set another lap; however, kept his position.

Vesti was next to cross the line, claiming P2 with a 1:43.900. He was, however, pushed down the field as Logan Sargeant took pole position in a last-minute scramble with a 1:43.871.

The Championship contender sees another two points added to his tally, slowly closing the gap to Drugovich.

The top ten qualified as followed;