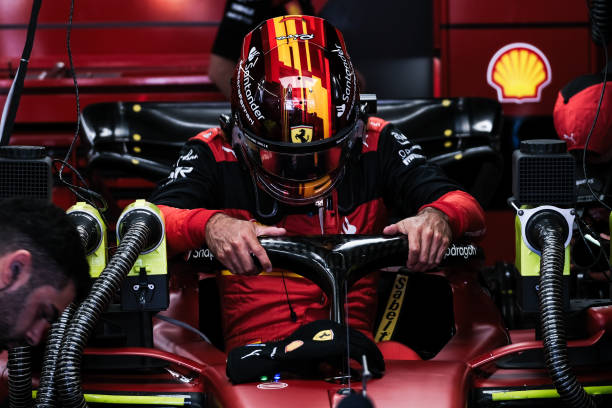 Sainz Sr has shared his thoughts on Sainz Jr's 2022 season.

Carlos Sainz Senior has spoken on the F1 Nation podcast about his son’s performance this year and what the young Spaniard needs to focus on.

Carlos Sainz Sr featured on the F1 Nation podcast for this week’s episode. Having been a rally driver and a two-time winner of the World Rally Championship, Sainz Sr has experience racing. In the podcast episode, he commented on his son’s performance during the first six races of the 2022 season.

2022 is Carlos Sainz Jr’s second season with Scuderia Ferrari. Last year, Sainz Jr outshone his teammate by being the most consistent driver on the grid. He finished every race and achieved a points finish in the majority of the 22 races.

This season, Charles Leclerc has had more consistency than Sainz and is 39 points ahead in the Drivers’ Championship. But that isn’t to say that Sainz Jr hasn’t had a good season. Out of the first six races, the Spaniard has been on the podium in half of them. In Bahrain he finished P2, the following round he finished P3 and in Miami, he also finished P3.

At Imola, F1 had the first Sprint Race of the season. In this race, Sainz Jr finished P4 gaining five points. However, in both the Australian Grand Prix and the Emilia Romagna Grand Prix, he didn’t finish the races.

In Australia, Sainz Jr ended up in the gravel trap after attempting to overtake Lance Stroll. At the time, Sainz Jr commented saying it was a weekend of “disaster.” The following weekend wasn’t much better as a crash with Daniel Ricciardo on the opening lap at Imola caused the Ferrari driver to DNF.

The two most recent races, however, have seen a stronger performance, results-wise, from the young Spaniard.

His father noted that the weekend of Sainz Jr’s home race, the Spanish Grand Prix, had “not been the weekend that he was dreaming of”. In Barcelona, Sainz Jr qualified third but didn’t have a great start when the lights went out.

Last season he settled into Ferrari and with their 2021 car well. But this season, it seems he is struggling more. Sainz Sr said that currently, his son “is going through a period that he really needs to rethink and try to go step by step.” He continued saying:

“Because when you are not confident with the car, mistakes, pressure, the build-up to the season hasn’t been very smooth. I think he has to, you know, try to sit back and try and build the confidence again.”

With 22 races this season, there is still time for Sainz Jr to get to grips with the F1-75. His father agrees that it is only a “matter of time” until he gets on the pace and drives at the same level as Leclerc.

When speaking on what Sainz Jr needs to do, Sainz Sr said:

By Katy Roberts5 hours ago

“You just need to work hard, stay calm, try to stay focused and try to think… of the next one and go step by step. I know he’s very capable, so it’s just a matter of time before he understands and adapts the car to his style.”

Mattia Binotto, Team Principal of Ferrari, has also demonstrated his support for Sainz Jr. Despite the result in Spain not being what they wanted, Binotto said:

“Probably, he still does not get quite the feeling he wants from the F1-75 and it’s up to us to help him become completely comfortable with it.”

“He is tenacious, he studies the situation and never gives up and so I am sure that he will soon come to feel really at ease in the car.”

There are 16 races left this season. With this many races, surely there is time for Sainz Jr to get fully familiar with the car. We have seen the Ferrari have pace this season, especially in the slower corners. With a car like the F1-75 and his own tenacity, we could see him excel this season and add more podiums to his 2022 achievements.