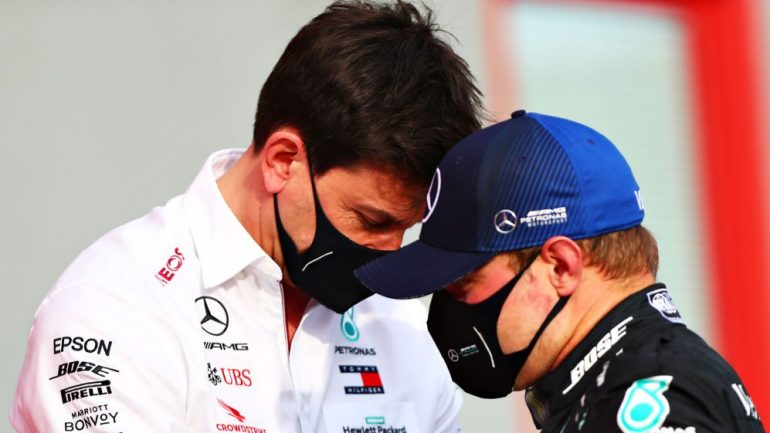 After the catastrophic race result in Qatar for Valtteri Bottas, Mercedes could bring forward the ace up their sleeve for the two remaining races this season: George Russell.

To defend the constructors’ championship against Red Bull and to support Lewis Hamilton during the race, the second driver plays a key role. Bottas has not always been consistent in fulfilling this job this season, raising doubts about whether he should finish the season with the Silver Arrows.

Sky F1 Germany expert Olivier Zwartyes suggested Bottas should be swapped for George Russell as he will soon be driving for Mercedes anyway and Bottas is moving to Alfa Romeo.

“If I had a say, I would actually think about it. Bottas is going to Alfa Romeo, that balloon has deflated. Russell has been so much fun this season and will be driving there next season anyway, so why not give him those two races – and Hamilton the support.”

Russell has already shown in 2020 at the Sakhir GP that he can handle the Mercedes very well. Because Lewis Hamilton came down with Covid-19, the Williams driver replaced him for that race. His performance was outstanding. He was well on his way to winning the race until the pit crew made a mistake and he also suffered a puncture.

Due to Bottas’ ups and downs during this season, Mercedes has lost important points. But the idea of swapping the Finn with Russell will probably remain just an idea. Zwartyes admits that this idea has already been brought forward to Toto Wolff, but he has rejected it:

“Toto Wolff has already been asked about this and said: ‘There is nothing like that in our team.’”

Alexander Bodo, a race strategist who has worked for Mercedes, does not agree with the Sky F1 expert’s suggestion:

“The pressure situation is so high and Mercedes and Bottas are a well-rehearsed team.”

Russell’s confidence building at Mercedes is also supposed to be different. His career there could even be hindered more by this potential premature swap, Bodo said:

“There is another plan for Russell in the future. I think it would be foolish to throw him into this pressure scenario now, where the championship finale is right around the corner.”

Even though this thought process sounds promising of an exciting race to come, we will probably have to wait until the next Formula 1 season to see Russell in a Mercedes again.