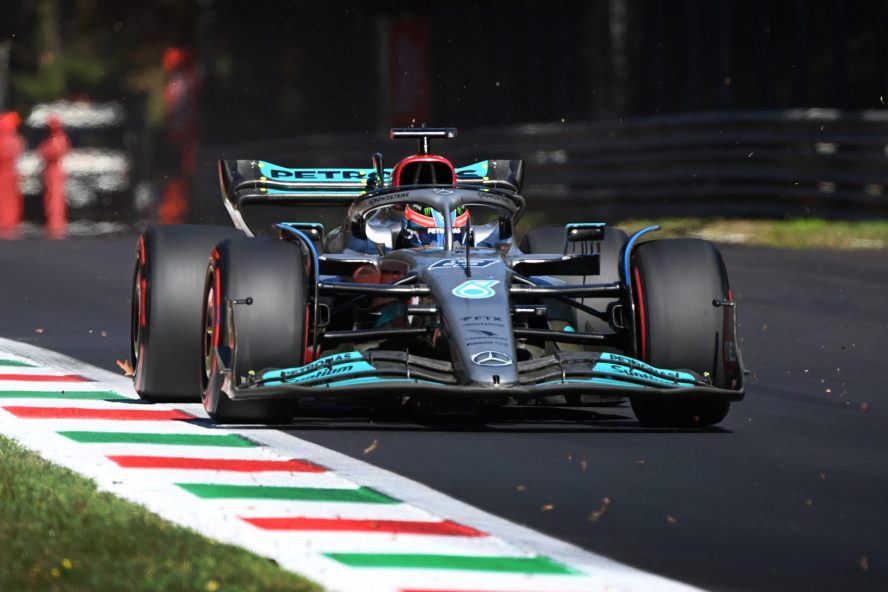 Russell reveals if Mercedes will change design of 2023 car

Mercedes driver George Russell has indicated the design path the team could follow for 2023. He also says the team is beginning to understand the troublesome W13.

The British driver could not have predicted when he signed for Mercedes last season that his 2022 season would see Mercedes so far off the pace of Red Bull and Ferrari.  Despite the W13 being the third fastest car on the grid, the British driver has scored a pole position and scored seven podiums, including a second place at Zandvoort.

The W13 features one of the most unique and radical designs seen in F1 for many years.  Its ultra slim sidepods have been blamed for the excessive porpoising at the start of the season.  Both drivers suffering badly in Baku. While performances have improved in races, The W13 has yet to score a victory in 2022.

Speaking to formula1.com, Russell has indicated the team is open both changing its current design or altering its philosophy altogether. Confirming “nothing’s off the table”, he reiterated the belief that the sidepod design was not the sole cause of the W13’s pace problems, hinting another “differentiator” is to blame:

“But ultimately whether we have the wide sidepods or the narrow sidepods that isn’t the performance differentiator, there is more to it.”

Russell said the team now has a firm understanding of why the W13 excels at high downforce circuits.  Citing Zandvoort and Budapest as examples, the W13 was on the pace of Red Bull and Ferrari in these races, with Russell finishing second and third respectively. The team also now understands why low downforce, high speed circuits continue to see the car struggle to match the title contenders. Russell admitted: “That doesn’t mean that we can solve the issues overnight”.

At the Italian Grand Prix, Russell said that the pace of Ferrari “caught us by surprise”. The W13 could not keep Verstappen’s Red Bull behind. Once past, the Dutchman then dominated on his way to victory. Russell was unable to challenge Verstappen, or second placed Charles Leclerc.  Despite this, Russell still finished P3, a strong result considering the W13′ struggles:

“But we’ve got to keep on developing this car and next year will sort of be an evolution of this and I think now we do have a totally clear direction of how to develop the car.”

“[Monza] Definitely wasn’t our strongest race of the season by far, the car wasn’t feeling great, we lost quite a bit of performance since FP1 on Friday and we don’t really know why but I think the biggest thing was the pace of Ferrari surprised us.

“We expected Max and the Red Bulls to be competitive and exactly how they were this weekend and how they were at Spa but Ferrari caught us by surprise, so that is why we couldn’t really fight for that P2.”