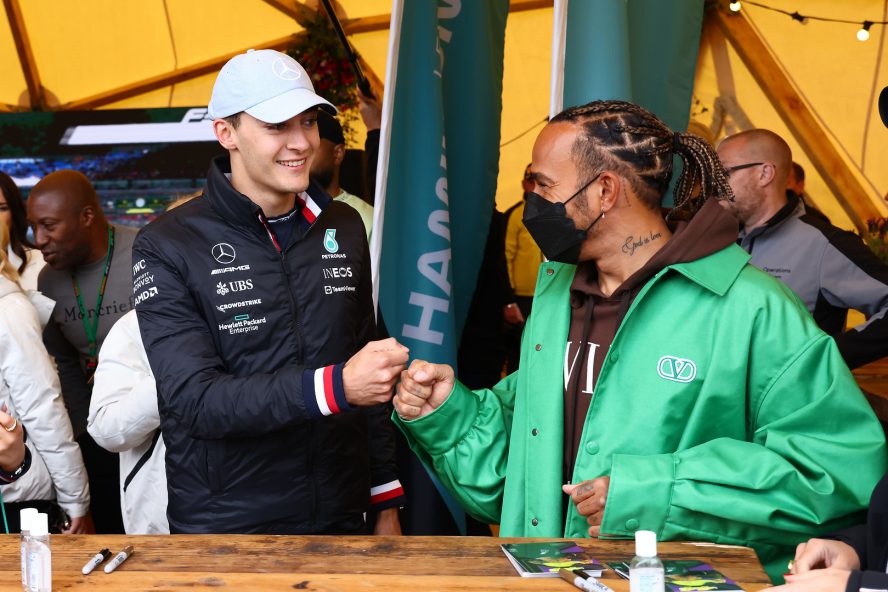 Russell On Hamilton: “No Reason To Have Conflict”

Mercedes driver George Russell believes he and teammate Lewis Hamilton will have no reason to conflict in the future but will keep in mind what is best for the team as the duo maintains a “good relationship”.

One of the most exciting driver pairings on the grid is undoubtedly made up of Lewis Hamilton and George Russell. If the first is an already accomplished driver with seven World Championships, the other, who just recently moved to a top team with Mercedes, is still looking to affirm himself as the talent of tomorrow. This difference in experience within the sport is, according to Russell, what prevents an internal conflict at Mercedes.

As quoted by Motorsport.com, the 24-year-old stated:

“I mean naturally if you are fighting for 1-2s there will be a slightly different dynamic and that’s only natural.  But I think the thing we have going for us is the fact that we are at very different stages of our career.

“It kind of feels like we are in this together, really. If we get to next [season] and we’ve got a car that’s capable of 1-2 finishes, we will have a huge amount of pride in thinking we have contributed together in helping the team achieve this. And then we go about our business. But we’ve got no reason to have conflict. We have got a good relationship. “

Russell: “We need to give each other respect”

Mercedes Team Principal Toto Wolff had previously admitted how the conflict between Lewis Hamilton and Nico Rosberg had divided the team inside the walls and how for the German manufacturer avoiding another similar situation was crucial.

Russell’s words then are a confirmation of the same principle: “We need to give each other respect, and I think we gave each other respect [in Mexico at the first corners] as an example. We recognise the importance of that within the whole team. If our relationship starts to break up, it’s going to have an impact on the team and ultimately it’s going to go full circle and affect us as well. I think we can continue to build off this and if anything our relationship will probably get closer as time goes on.”

Yet, both drivers have already stated their intentions to fight for the Championship in the near future and, as far as respectful rivalries go, Wolff will have to try and keep the team working together while proving lessons from the past weren’t forgotten.