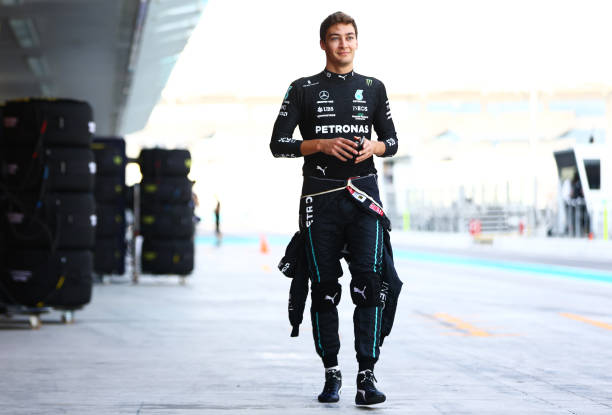 Russell: ‘I feel ready to fight for a championship’

George Russell reveals all in an interview about his time at Mercedes in 2022, his first F1 victory and how he feels about 2023.

George Russell took a step up in 2022 as he joined Mercedes as a full-time driver, having left Williams. Russell was part of the Mercedes Driver Academy throughout his junior career and after stepping into the Mercedes in Bahrain back in 2020, he finally made the jump.

The beginning of Russell’s season at Mercedes began strongly as he was the only driver to finish in the top five in the first nine races. Silverstone was his first and only retirement from a grand prix this year after he went to check on Zhou Guanyu, who had suffered a horrific crash.

As well as having a consistent season and outscoring Lewis Hamilton in some races, Russell achieved his first Formula One victory and pole position. In Hungary, Russell managed to put his car on pole, but unfortunately couldn’t turn it into a win – he did, however, achieve a podium finish. Over the weekend of the Sao Paulo Grand Prix, Russell won the Sprint Race and went on to win the Grand Prix on the Sunday.

The 2022 season has seen a mixture of highs, like his Grand Prix victory, and lows. In an interview after the Brazilian Grand Prix, Russell opens up about his first season with Mercedes, his struggles of 2022 and what it’s like going against a seven-time world champion.

Russell’s first season as a full-time driver for the Silver Arrows saw him finish fourth in the Drivers’ Championship, just 30 points shy of Sergio Perez in third. Across the 22 races, Russell scored seven podium finishes, not including his race win.

The Brit reflected on his 2022 season and also his appearance for the team back in 2020. Russell said that “coming in last minute, jumping in and winning the race [Bahrain 2020]…of course, it would have made for a great story.” But it would have been “too easy”.

In that race, Russell finished 12th. He admitted that he “didn’t necessarily fight for it”, it was “handed to [him] because of Lewis falling ill.” But in Brazil 2022, Russell wasn’t just handed the win.

The Mercedes driver said that he’s “always believed if the car beneath [him] is working” how he wants for his driving style, then “on a given day [he] can beat anyone.” In the interview, Russell said that during his race in Brazil, “Bahrain didn’t cross” his mind “once”. He continued saying:

“It’s quite a strange feeling because I’ve only obviously led a handful of [F1] races now but the race I led the most was Bahrain and then Brazil.

“When you’re out front and you’ve got a bit of a buffer behind, you’re actually quite at peace because you’ve got no one in front of you, you’re not under great pressure.”

Russell elaborated on the reduced pressure when you’re in the lead. He said it gave him “opportunities to manage the tyres a little bit…manage the brakes…or manage the fuel levels.”

However, towards the end of the race, Russell knew he couldn’t afford “to manage the tyres” in fear of being overtaking by DRS. With that, he admitted how hard it was to stay in the lead.

The year as a whole

Russell entered Formula One back in 2019. He drove for Williams for three years and since joining Mercedes, Russell confessed that he learned “a hell of a lot more this year than [he] learned in [his] final year at Williams.”

The former Williams driver explained that “when you’re three years in the same environment, the same engineer, the same mechanics, pretty much the same car, you get to a certain point where you’re always learning but there wasn’t anything new coming to the car.”

But for Mercedes, things changed each race weekend. There were struggles for the team in terms of porpoising and their no-sidepod concept that they introduced at the beginning of the year. Because of the obstacles in the team’s way, the W13 wasn’t a championship winning car.

By Catherine Micallef19 hours ago

However, for Russell that didn’t stop him from fighting. In the interview, he said:

“Every race I go to, I fight to do the best job possible, whether that is fighting for a victory as we were in Brazil, or fighting for last place as we were at Williams.

“If we do get to the first race next year, and we realise we’ve got a car that’s capable of winning, I’m still gonna be approaching it exactly the same.”

Russell has faith in his abilities and believes that he can fight for a championship. He said:

“Everything I do right now is for performance and to try and get the best performance possible. I think I’ve got enough experience now that I feel ready to fight for a championship and be able to handle the challenges and difficulties that come with it.”

Russell’s teammate, Hamilton, and Red Bull driver Max Verstappen have “more experience” in terms of winning a championship than Russell. However, the King’s Lynn driver noted that:

“If you go out and you put it on pole and win every race, you’ll be world champion. So you’ve just got to focus on smaller details and it’s in your own hands, almost.”

Mercedes battled on track for P2 in the Constructors’ Championship towards the end of 2022. Sadly, they missed out to Ferrari but with their dominance in the hybrid era and the improvements they made throughout this season, they could be battling for the championships next year.

The question is: Will Russell be able to beat Hamilton if they’re in the championship fight?