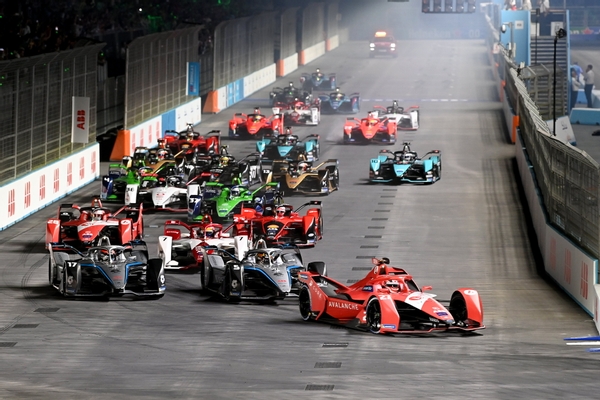 Jake Dennis (GBR), Avalanche Andretti, BMW iFE.21 Leads at the start of round 13

In a tense championship who will take the win?

Jake Dennis takes a consecutive pole position for round 14 around London.

Yesterday’s race winner and pole sitter Jake Dennis topped the times of Group A with a 1:13.279. Antonio Felix Da Costa took P2 with a 1:13.360 while Nyck de Vries claimed P3 with a 1:13.370. Oliver Askew took the final duel spot with a 1:13.473, seeing both Andretti’s into the duels once again. In a shocking mix-up for the championship, leader Vandoorne was eliminated.

Buemi and Dennis were the first to take to the track, Buemi going out first. Buemi set a 1:13.197. However, this wasn’t enough to send him through to the semi-finals. Dennis set his sights on pole, once again setting an incredible 1:12.661.

Askew and Di Grassi were the final pair into the duels. Askew took to the track first. However, after making contact with the wall at turn eight, he was unable to continue as he crawled to the pits becoming the first crash of the duels this season. Di Grassi progressed into the semi-finals with a 1:12.686, a time comparable to Dennis.

Giovinazzi and Di Grassi were the last pair to take to the semi-finals. Giovinazzi took to the track first and despite setting an astonishing lap with a 1:12.962, it was enough to see him into P3. Di Grassi progressed into the final with a 1:12.641.

Di Grassi and Dennis went face to face in the finals. Dennis took to the track first, setting an incredible lap with a 1:12.535 taking his second consecutive pole position at his home race. Di Grassi will line up alongside him on the front row after setting a 1:13.619.

Will Dennis take the win once again?